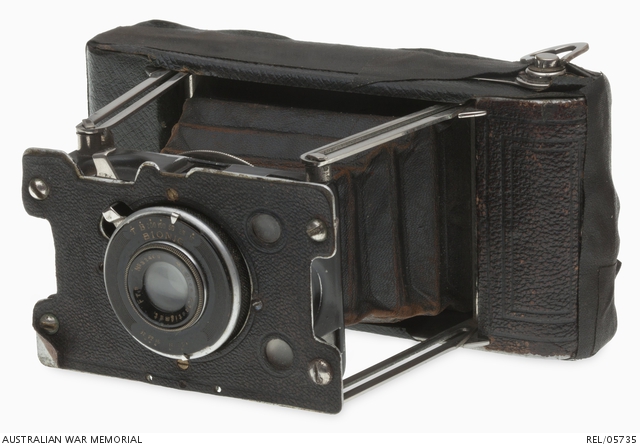 Folding vest pocket camera (model A - The Bionic) manufactured by the Ansco Company New York of Binghamton N.Y. The camera is fitted with a variable focus Modico Anastigmat lens with an aperture range of f.7.5 to f.32. shutter speeds range from 1/10th to 1/200th seconds. Camera body is made of thin steel finished with a leather covering. Shutter is released by means of a press button lever mounted on top of camera. The lens is attached to a cloth bellows which collapses into the body to form a rectangle measuring 15.5 by 7 by 3cm. Body Serial number is 3804.

This camera was given by Florence Bowden to her brother, 167 Petty Officer Herbert Leonard Bowden of the Royal Australian Naval Bridging Train, in 1915. The Memorial holds a large collection of photographs taken with it taken in Colombo, Aden, Cairo and Heliopolis, Gallipoli, around Egypt, Tewfik and the Suez Canal, Ismailia and El Arish. His sister later wrote: 'My brother developed and printed them himself, in between building Pontoon Bridges.'

Herbert Leonard Bowden was born in Kingswood, South Australia on 7 June 1893 and was working as a draper when he enlisted in RAN Bridging Train in March 1915, aged 21. He had previously served in the naval reserve. He embarked for Egypt aboard HMAT Port Macquarie on 4 June.

Arriving at Lemnos in late July 1915, he served with his unit on Gallipoli from early August, building pontoon piers, maintaining harbour facilities and landing stores. Later they installed and supplied water tanks. Other responsibilities included salvaging of wrecked ships and at the end of the campiagn, constructing embarkation piers for the evacuation.

Post Gallipoli, the Bridging Train was involved through almost all of 1916 in the Suez Canal Zone in operating various 'swinging' pontoon bridges in use there at that time. Originally ranked as an able seaman driver, Bowden was promoted to leading seaman in February 1916, and to petty officer a month later.


Petty Officer Bowden was transferred to El Arish in Egypt between December 1916 and the end of March 1917, involved in the establishment of a landing pier (under fire from the Turks) in mined waters off El Arish. The Bridging Train was disbanded in May 1917. Bowden returned to Australia with his unit aboard HMAT Bulla. He was discharged from service on 24 July 1917. Bowden died in October 1919, from tuberculosis contracted as a result of his wartime service.