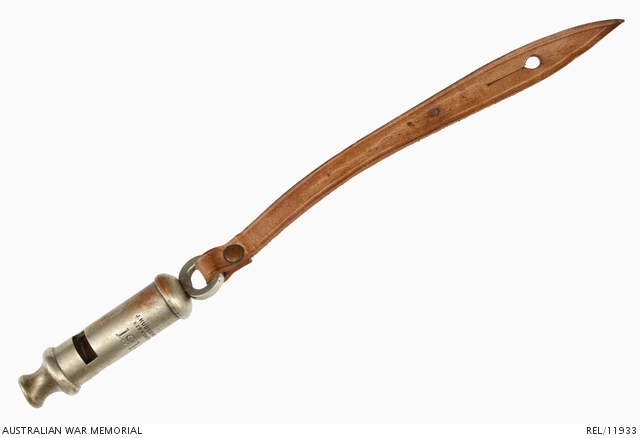 Standard nickle-plated brass tube-bodied whistle with intergal suspension loop, double window and lead fipple. The maker's details and the date 1914 are impressed into the main barrel of the whistle. A 175 mm long tapered leather strap, with buttonhole slot at one end, is attached to the loop with a copper rivet. The nickle plating is worn.

General Service whistle used by Frederick William Dempster Forbes during his First World War service. Forbes, born 24 February 1883 at Prahran, Victoria, joined the Prahran Senior Cadet Battalion in January 1900. Promoted to Lieutenant in July, he commanded his portion of the Victorian Contingent attending the Inauguration of the Commonwealth celebrations in Sydney on 1 January 1901. In February 1904 he was promoted to Captain and transferred to the Victorian Rifles, newly-formed under the Commonwealth Defence Scheme. An enthusiastic soldier, Forbes attended nearly all the annual training camps and schools he could between 1900 and 1909; in 1910 he was placed on the unattached list and concentrated on his employment as an accountant at the Bank of NSW.

Forbes enlisted on 24 March 1915, being appointed as a captain in the AIF with 21 Battalion. He was promoted to Major on 1 April and embarked for overseas service aboard the transport ‘Ulysses’ which left Sydney on 8 May and arrived at Alexandria, Egypt, on 12 June.

As part of the newly raised 2nd Australian Division, 21 Battalion proceeded to Gallipoli from Egypt in late August aboard the transport ‘Southland’ which was torpedoed on the morning of 2 September about 40 miles south of Lemnos; all but 32 men survived in a calm and orderly evacuation of the ship under Forbes’ direction. They finally landed at Gallipoli on 7 September where their experience was described as ‘relatively quiet’; Major Forbes left the peninsula early on 3 December with rheumatic fever, a common ailment on Gallipoli after once winter arrived, but rejoined 21 Battalion at Alexandria at the end of January 1916.

The battalion transferred to France via Marseilles on 26 June and became the first Australian battalion to commence active operations on the Western Front. During the battle of Pozières it was engaged mainly on carrying duties, but suffered its heaviest casualties of the war during the fighting around Mouquet Farm especially during the assault on 25-26 August 1916. A week prior to the start of this battle, Forbes was promoted to Lieutenant –Colonel, replaced Lieutenant –Colonel J Hutchinson as battalion commander; he led their attack on Mouquet Farm which, in two days, cost 21 Battalion thirteen officers and 444 men. For his leadership role in these two assaults, Forbes was recommended for the Distinguished Service Order, for ‘conspicuously good work as Senior Major, and in command of his battalion at Pozieres’, noting that he ‘possesses the confidence of his men to a very high degree’, and in action ‘was thorough in every respect’. His performance during the sinking of the ‘Southland’ was also noted.

On Christmas Eve, Forbes was detached for duty with 6 Infantry Brigade, staying with this command until rejoining 21 Battalion in Belgium on 31 January 1917. His ‘distinguished and gallant services’ to date were noted in Haig’s mentioned in despatches of 20 January. He quickly returned to 6 Brigade on 19 February, this time as temporary Commander, in General Gellibrand’s absence. He rejoined 21 Battalion on 6 March, just as the general German retirement had been noted and the allies were cautiously advancing into abandoned positions. On 9 April, special mention was again made of Forbes in Haig’s despatches. On 29 May, he was transferred to command 6 Training Battalion at Rollestone and remained in command of training battalions for the following year, taking command of No 2 Training Group (comprising 4, 5, 6, 7, 12 and 13 Training Battalions) from 16 July to 6 November, before assuming control of 2 Training Brigade as Commandant. This period, Forbes noted later, ‘was an extremely interesting study of the improvement which can be effected in the training of raw material, who come off the Transports in the roughest possible condition, and as the result of such training ultimately proceeded overseas as fit and well-trained as the short time available made possible.’

On 17 May 1918 Forbes was handed command of 19 Battalion, then holding the line at Morlancourt; only 2 weeks later he was transferred to command 20 Battalion. It was his work with this battalion, developing the principle of peaceful penetration at Villers-Bretonneaux and Morlancourt, and later operations during and after the August 1918 Offensive, often at the sharp end of assaults at Clery and Mont St Quentin, that earned him his Companion of the Order of Saint Michael and Saint George (CMG) recommendation. In early September he was detached to temporarily command 5 Brigade for two weeks, before rejoining 20 Battalion. Post-Armistice, Forbes commanded 5 Brigade until 12 January 1919, before returning home to Australia aboard the transport Miltiades. His appointment was terminated on 12 October 1919.