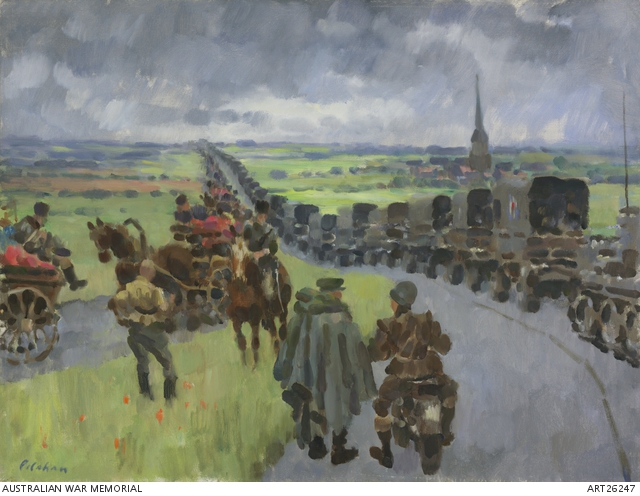 In one of his first paintings of early convoys on route to Berlin, official war artist Colin Colahan depicts the evacuation of German refugees and troops from the capital and surrounding villages as allied troops enter. The landscape is dramatically divided by two columns passing each other along the sweeping curve of road. Colahan worked directly in oil, rather than painting from sketches made in the field, and here the mood and atmosphere of the scene is rendered with immediacy and vigour.

Colahan was commissioned in 1942 and again in 1944. He began work in Britain, depicting the activities of the Royal Australian Air Force and Australian Forestry Units. After the surrender of Germany, Colahan went to Europe to capture the changing conditions in liberated areas. He travelled through Belgium, France and Germany, painting the celebrations of VE Day, fleeing refugees, and the destruction he witnessed in Berlin.