The Kaiser to his Secretary

The Kaiser to his Secretary 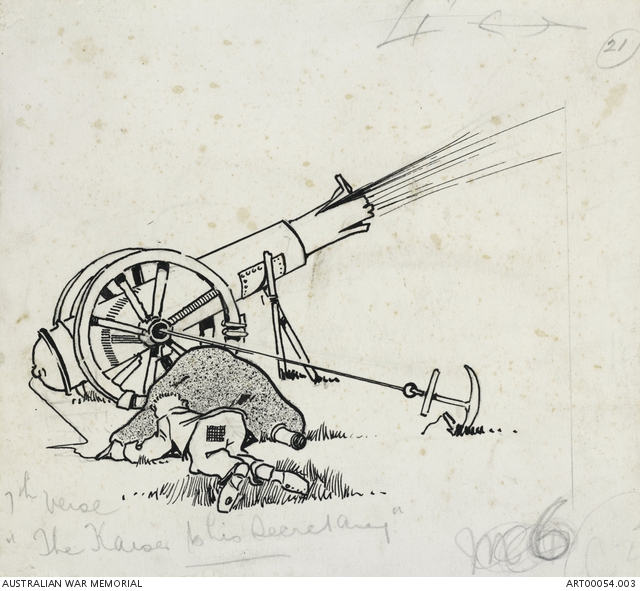 Illustration showing an anchored cannon being fired while a soldier shelters behind a rock. It was used to illustrate the poem 'The Kaiser to his secretary' in 'The ANZAC Book'. David Barker was part of the 5th Field Ambulance at Gallipoli. The 'ANZAC Book' was published in 1916 from illustrations, poems, stories and other creative works from the soldiers on the Gallipoli peninsula. In November 1915 CEW Bean, an official war correspondent and eventually official war historian, called for contributions for what was initially to be an ANZAC New Year magazine. Bean edited the work on the island of Imbros and after the Greek publisher fell through, arranged to have the work published in London by Cassell and Company. The book is composed of satirical and sombre pieces about the conditions of life at Gallipoli. It also provides a general outline of the April 25 landing at ANZAC Cove and the military advances, offensives and defensives undertaken in the following months until the eventual evacuation of the Allied forces at the end of December 1915. The introduction was written by General Sir W Birdwood, who explains how he named ANZAC Cove on the Gallipoli peninsula after the ANZAC forces. Bean contributed an editor's note in which he outlined the harsh conditions that the book was produced in, the significance it had taken on, and acknowledged the contributors.