The departure of the Australian contingent for the Sudan 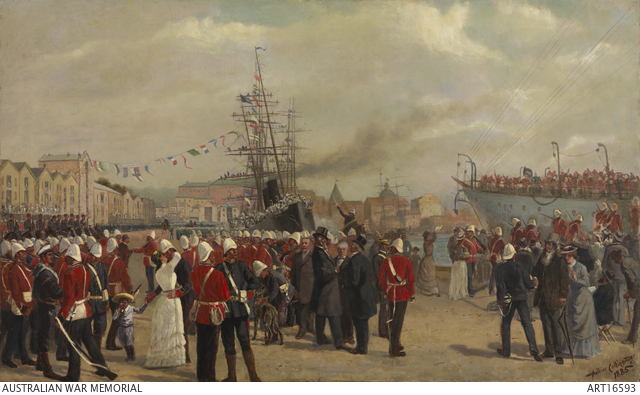 The dispatch of a small New South Wales military contingent to the Sudan War in March 1885 was an important moment for the British empire and its Australian colonies. For the first time, one of those colonies had raised, equipped and funded a force of full-time soldiers to fight overseas in a war to uphold imperial rule and Christian values. Some said it marked a new maturity among the people coming to call themselves Australians. Perhaps two in every three Sydneysiders gathered to watch the contingent march through the city streets and board its boats, the SS Iberia and the SS Australasian, at Circular Quay. Arthur Collingridge, an English born, French trained newspaper illustrator and painter, was on the wharf to record the moment of embarkation. Collingridge arranged what he saw at the wharf into a tableau of businesslike comings and goings, and touching farewells, often using his family as models and characters. On the right of the canvas, his mother, in grey, supports his bearded brother George as he shakes hands with a soldier. Behind them sits Collingridge himself, sketching the scene. Over on the left, his wife, dressed in white, kisses his brother Charles, the contingents' Roman Catholic chaplain. The boy wearing the straw hat and holding Charles's hand may be Collingridge's son Gordon. In the centre, four black coated dignitaries have gathered: Treasurer George Dibbs, Governor Lord Loftus towering above the others, Acting Premier William Bede Dalley, and Mayor Tom Playfair. Like the soldiers, these men lack pomp; they could be provincial businessmen congratulating themselves on the shipment of their latest produce, which in a sense they were. Yet the cause of Imperial defence and Australian advancement was loftier then that, and the most visible flag in the painting is the blue cross with the Union Jack flown by advocates of Australian federation.