Our colonial defences: a company of the mounted rifles manoeuvring in Victoria 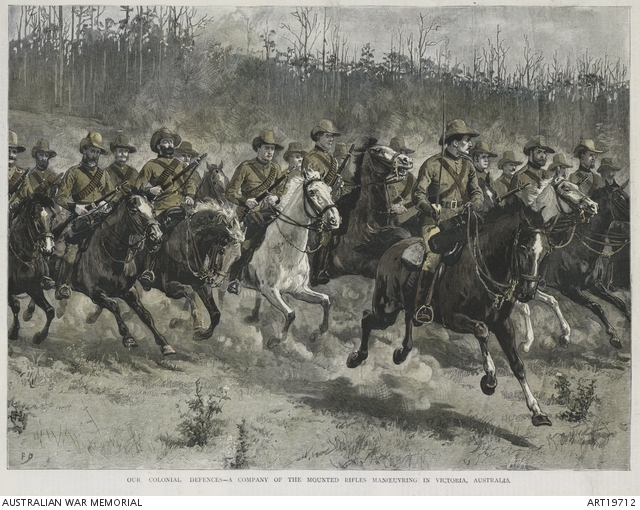 Depicts the company of VMR (Victorian Mounted Rifles) riding through bushland during training. It has been alleged that this work was based on a photograph sent to the Graphic by Lieutenant Colonel Tomkin. Formed in 1885, Victorian Mounted Rifles (1885-1901) companies were recruited in rural centres. Members of country rifle clubs formed a significant component. They were semi-professional and only a small allowance was paid to members. Mounted Riflemen were required to provide their own mount. They served as part of the Victorian Colonial Military Forces - the umbrella term for organized Victorian (non-British) pre-colonial military activity.
This work was produced by Frank Dadd (1851 - 1929) . Born in London, he studied at the Royal College of Art and at the Royal Academy Schools, where he won a Silver medal for drawing from life. He commenced black and white work in about 1882 and worked as an illustrator for the 'Illustrated London News' from 1878-1884 and then at The Graphic. He specialised in historical and genre paintings, and in addition illustrated several books. He was honoured to have his paintings chosen for exhibition at the Royal Academy from 1878. He was elected to the Royal Institute of Painters in Water-colours in 1884 and the Royal Institute of Oil Painters in 1888. He lived at Wallington in Surrey, England and later at Teignmouth in Devon where he died on 7th March 1929.