After the Zeppelin raids 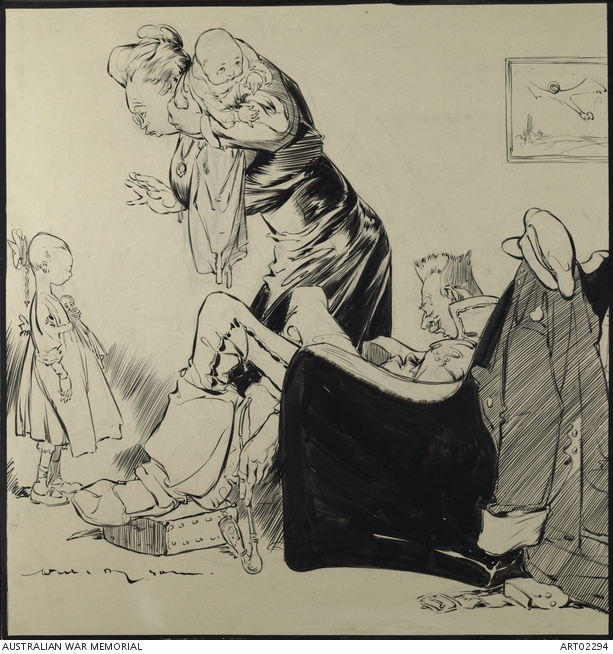 Depicts a German family scene, consisting of a mother, holding baby and scolding a small child for disturbing her father. The father, a German officer in uniform, slumps wearily in a chair. The caption accompanying this caricature is; "Hush, you naughty childrens! You vill vaken your vader, und him so tired out mit dropping bombs on liddle English childrens! Have you no proper feelings?". The cartoon was probably done after the intensive German Zeppelin raids on Britain during March- April 1916, with raids continuing in 1917. The last great raid occurred in October 1917. From 1915, a number of Dyson's caricatures were published, characterised by his response to Germany's military monarchy. Using a figure loosely based on the Kaiser, Dyson identified the 'common enemy' and attacked it with vigour. When some of his anti-German cartoons were published in 1915, they were accompanied by the following foreword; 'Mr. Dyson...responds to all the fearful pressure of this war in cartoons. He perceives a militaristic monarchy and national pride a threat to the world, to civilisation, and all that he holds dear, and straightaway he sets about to slay it with his pencil...he turns his passionate gift against Berlin." Will Dyson was the first Australian official war artist to visit the front during the First World War, travelling to France in December 1916, remaining there until May 1917, making records of the Australian involvement in the war. He was formally appointed as an official war artist, attached to the AIF, in May 1917, working in France and London throughout the war. His commission was terminated in March 1920.