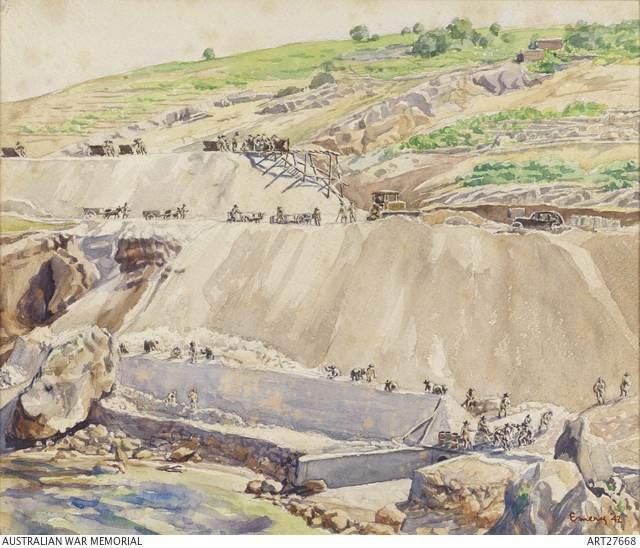 Distant view of the Australian Railways Construction Group at work. Men in slouch hats hauling supplies and constructing a bridge for the railway in the upper third of the work while others work with donkeys and carts below them. In the lower third, men seem to be building a dam wall. From file 561/001/004 fragment of an account of the construction of the Haifa-Tripoli Railway by Colonel Fraser (CO of Railway Survey Company... of which Emery was attached): 'The British War Office asked for the work to be completed in 18 months but it was actually carried out in 10 months. The officers and men of the Railway Unit took a keen interest in the work and felt that something had been accomplished towards the war effort. The fact that the section constructed completed the standard gauge railway link between London and Cairo added an historical note.'This work was included in the 'Exhibition of watercolour paintings of parts of the Middle East: Egypt, Palestine, Syria by James Emery' from 2 - 14 August 1943; Fermer's Sydney, Blaxland Galleries. Cat No. 30: "One of the many "tough jobs" undertaken and completed in record time by Australian Engineers in the Middle East."