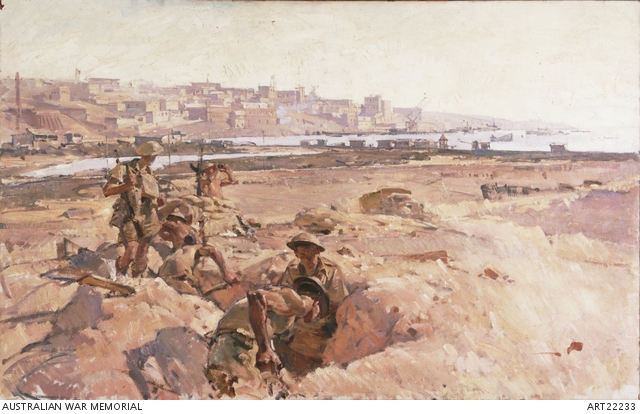 The town and harbour painted from drawings made in Tobruk at the beginning of February 1941, two weeks after the town had been captured by Allied Forces and before the Siege of Tobruk began. Less than two weeks after his appointment as a war artist Ivor Hele accompanied the victorious Australian 6th Division into the Libyan harbour town of Tobruk. He made a number of pencil sketches and small oil studies of the town and port area so as to be able to document what had been the Australians' greatest success to that date. Hele did not stay long in Tobruk, but moved on with the advancing troops before returning to Cairo when the possibility of his going to Greece was raised. He was well clear of Tobruk when, less than three months later, Rommel's advance cut off the 9th Division in the town, so beginning the famous siege of Tobruk. This painting was worked up from the drawings done in January as a tribute to the Australians, who, with British and Polish troops, held out until they were relieved in September 1941. At the request of the Australian Government Hele later painted a second version of the subject which was to be presented to the Polish people in appreciation of their army's role in the defence of Tobruk. The painting was never handed over and both works are now included in the AWM collection. Hele was serving as a private in the AIF, when in January 1941 he was commissioned in the field by General Blamey and given the task of depicting the activities of Australians in North Africa. His appointment was made official in October 1941. From June 1943 until the end of the Second World War Hele worked in a number of locations in Northern Australia and New Guinea, holding his commission until 1947. Hele was again commissioned an official war artist with the rank of Major for the Korean War. From 1953 he executed a number of portrait and painting commissions for the War Memorial and in 1969 was awarded a CBE for his services to art.