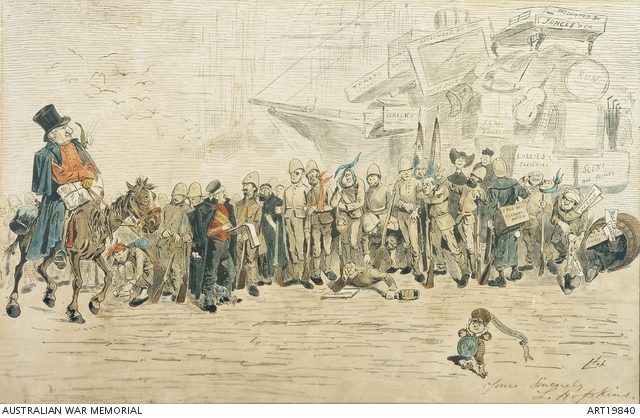 This image relates to Australia's contingent to the Sudan, who returned to Australia in 1885. The work parodies a painting by pre-eminent military artist Lady Elizabeth Butler, which was topical at the time - 'Calling the roll after an engagement, Crimea', 1874. It was topical because the AGNSW had mistakenly bought a replica of the work, under the delusion it was the original (they subsequently returned it). The cartoon depicts the Acting Premier, Mr Dalley, riding a decrepit horse while carrying a large bag of medals which are to be distributed. The Governor, Lord Loftus, is depicted as the Sergeant taking the roll call and the chook between his feet alludes to reports that he sold eggs laid at Government House. The chaplains stand near the back in front of a ship load of the gifts donated by merchants in February, the cartoon comments on the short time the contingent was away, the Jingoistic expectations of the daily papers, and the fact that the Contingent came back '...uninjured, and without having wrought injury upon anything more formidable than tinned beef' compared with the 'real' fighting and suffering experienced by the Grenadier Guards in the Crimea as shown in Butler's original painting.