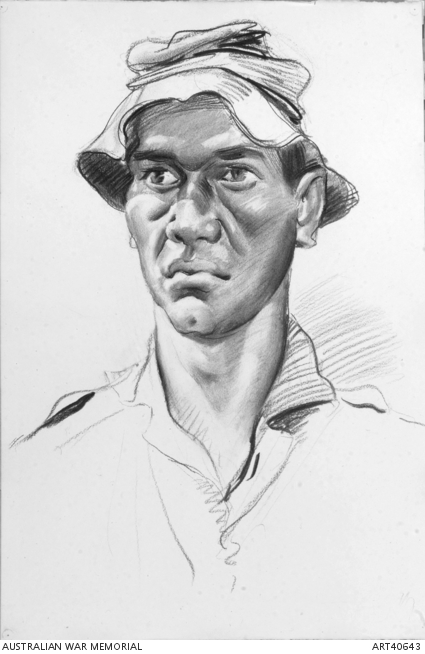 Head and shoulders portrait of a forward scout of 'B' Company, 2nd Battalion, Royal Australian Regiment (2 RAR). The soldier shows signs of fatigue due to the heat and constant patrolling near the 1st Australian task force (1ATF) base at Nui Dat, Phuoc Tuy Province.

"Forward scouts worked at the front of the patrol searching for signs of enemy movement: a dislodged stone, a bent blade of grass, a broken twig or a smell in the air; secret tunnels, landmines, 'punji' pits, and other obstacles and traps. The men relied on the skill of the scout. He needed to be focused and cool, have stamina and courage, and he operated by stealth and precision. He ensured mens' safety and a successful mission. His was a dangerous role."

Admiration and respect for the forward scout motivated Ken McFayden to sketch his portrait. Foward scouts were courageous and risked their lives to save the lives of others. When McFayden was asked about the sketch he replied: 'That chap was a full-blooded Aborigine and he was quite a wonderful bloke. I did get his name, but I don't know where the piece of paper went to that I wrote it on. He was such an interesting character. I had great difficulty in drawing that I was feeling very fatigued, very tired, and he too - being a forward scout - that's really being up the front all the time. He was carrying an F1 and the strain was showing on his face. I was finding it very difficult to sit out in that heat. It was done near Nui Day because there were patrols going on all the time outside and he was part of the patrolling. We were getting closer to the Tet Offensive and there was more activity."