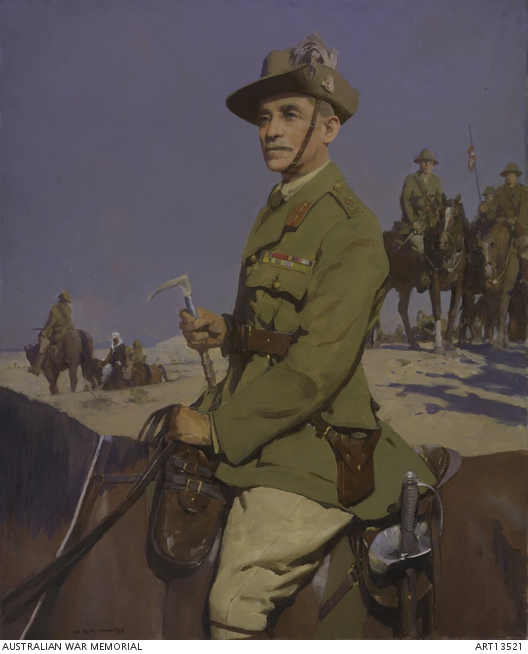 Portrait of Lieutenant General Sir Harry Chauvel mounted on his horse. Chauvel had written to Treloar requesting that McInnes paint him with his horse (Chauvel, letter to Treloar, 30 June 1936). General Sir Harry Chauvel GCMG, KCB (1865-1945) was both the first Australian to become a Lieutenant-General and lead a corps, and the first Australian to attain the rank of General. During the Boer War he commanded a company of the Queensland Mounted Infantry and afterwards played a prominent role in the establishment of a new Australian army. Chauvel commanded the first Australian Light Horse Brigade and the first Australian Division at Gallipoli, and in 1916 as commander of the Australian and New Zealand Mounted Division defending the Suez Canal he was responsible for the success at Romani. In 1917 he commanded the Desert Mounted Corps and led it to victory in many battles which culminated in the capture of Damascus and Aleppo. On his return to Australia he became Inspector-General and later Chief of the General staff (1923-30). On the outbreak of the Second World War he became Inspector General of the Volunteer Defence Corps.