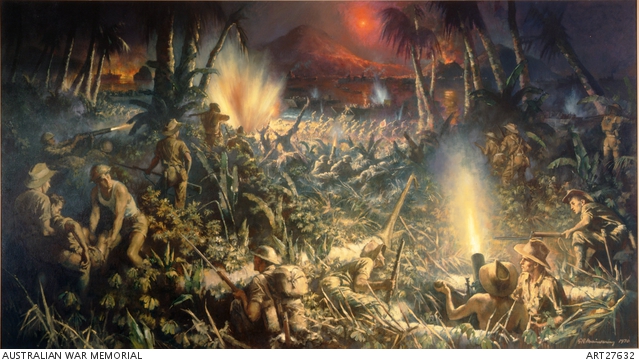 "A" Company, 2/22nd Battalion in action at Vulcan on the morning of 23 January, 1943. The Australian garrison at Rabaul (New Britain) consisted of the 2/22nd Infantry Battalion, AIF, supported by other Army detachments, totalling in all about 1,400 and one air squadron. From early January 1942 the Japanese began raiding the area and brave attempts at defence by out-classed Wirraway aircraft resulted in the loss of most of them. The Japanese invasion fleet entered Blanche Bay about 1300hrs on 23 January, and an hour later troops started coming ashore north and south of Vulcan Carter where companies of the 2/22nd were disposed. One company was quickly overwhelmed, but another - " A" company shown in this painting - was still resisting strongly at dawn. Ultimately, it was withdrawn in the face of intense enemy pressure, including air attacks. Despite spirited resistance by the Australian force Rabual was soon in enemy hands. Some of the garrison were forced to surrender, while others managed to escape from the island. The majority of those who surrendered lost their lives in the sinking of the Montevideo Maru on 1st July, 1942. Japanese occupation of Rabual continued until the end of the war, but the base had been by-passed by other operations and rendered ineffective by Allied bombing.