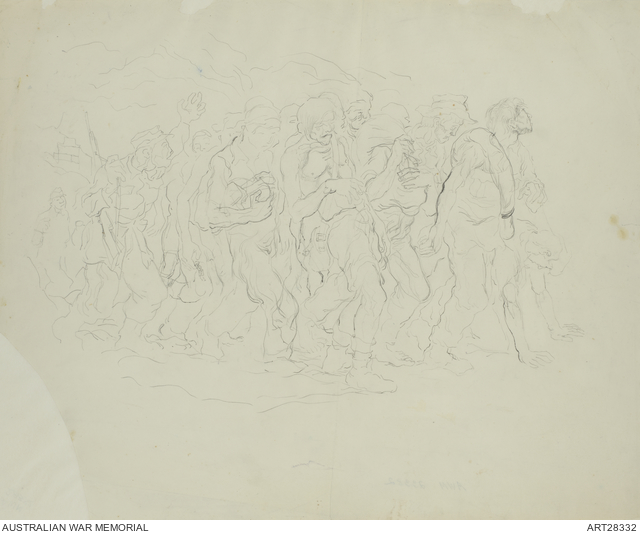 A pencil drawing of a group of marching prisoners-of-war by artist NX4185 Sergeant Arthur John Nichol. One man is shown with bare feet, while another is crawling on his hands and knees. German guards with rifles are marching alongside them, one with their arm raised and mouth open indicating shouting. One of the guards is wearing a hat characteristic of a German M43 field cap. This drawing is believed to depict a scene during 'The Long March'. During the Winter of January 1945, Nichol, along with thousands of other POWs were forced to march west by the Germans to escape the advance of Soviet forces. This event became known as 'The Lamsdorf Death March' or 'The Long March', where many fatalities occurred. Nichol survived the march and was eventually liberated in 1945 and repatriated back to Australia.

Nichol enlisted in November 1939 in Sydney at the age of 25 and served with the 2/1st Battalion, 2 AIF. In May 1941, much of his Battalion was captured in Crete while defending the strategically important airfield at Retimo against German advances and he spent the remainder of the war as a German POW. He was interned at Stalag VIII-B in Lamsdorf, Silesia (now known as Lambowice, Poland). His final rank of Sergeant was confirmed prior to his discharge in August 1945.