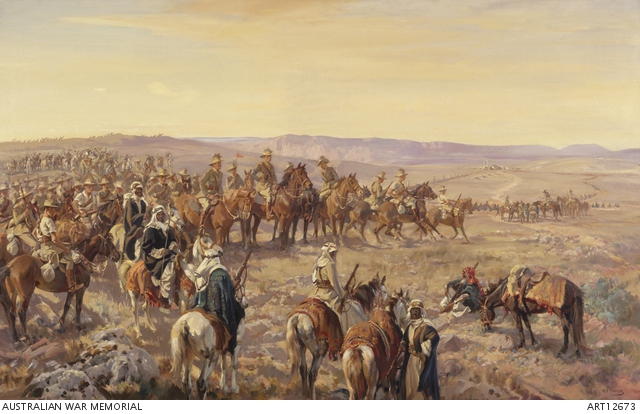 Depicts an unusual event that occurred on the night of the 28th - 29th September 1918. After the capture of Amman on the 25 September, a detachment of the 2nd Light Horse Brigade was ordered south along the Hejaz railway to intercept a Turkish force near Ziza, about 5,000 strong, which was moving north from Maan in an attempt to escape to Damascus. The Turks were surrounded by approximatley 10,000 Beni Sakr Arabs and hopelesly outnumbered.

The Turkish troops, fearful of the Beni Sakr Arabs in the surrounding hills, waiting to loot and kill, were reluctant to give up their arms when surrendering to the Australians. Brigadier General Ryrie, accompanied by two sheiks, galloped into Ziza and gave them permission to retain their arms overnight, but informed them that if they attacked during the night their hostages would be shot. After years of fighting the two armies spent the night sharing food and talking. Next morning the Turkish soldiers were disarmed and taken prisoner.

Septimus Power is well known for his superb large-scale paintings of horses in battle. In Ziza the artist has captured this remarkable desert drama.