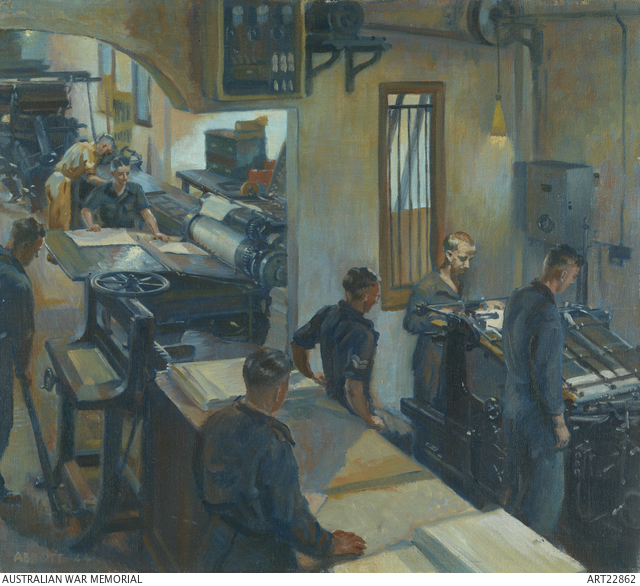 The printing office of the "Tableland Examiner", Atherton is shown, which has been taken over and supplemented with modern equipment by the First Australian Army Press Unit. The Unit printed 'AIF News' in the Middle East. The publication "Table Tops" is issued in two editions - the air special, which circulates North to Merauke and intermediate islands and South to Townsville and Charters Towers, and the final edition which is supplied to all units on the Atherton Tableland. The early edition comes off the press at midnight, and is rushed by Despatch Rider to Cairns airport for plane transport north and south. The later edition of 8 pages is completed by 0800 hours and is collected by trucks beginning their run at 0400 hours. All units in the area, some of which are 50 miles away, have their papers before breakfast. Distribution basis is one copy per seven men.

In the upper left-hand corner of the composition is the back of one of two linotype machines. Immediately in front of that is the composing stone on which the pages in type are composed for the press. Just through the arch is a "Wharfedale" press, fed by hand, which was used to print the local paper. It is now an emergency plant. In the left foreground is a hand-operated guillotine and bench, on which the papers are sorted, counted, and bound for despatch. In the foreground is a high-speed automatic "Speiss" press, three times as fast as the "Wharfedale" and which prints more paper in one run than the "Examiner", produced in 15 weeks as a bi-weekly paper.