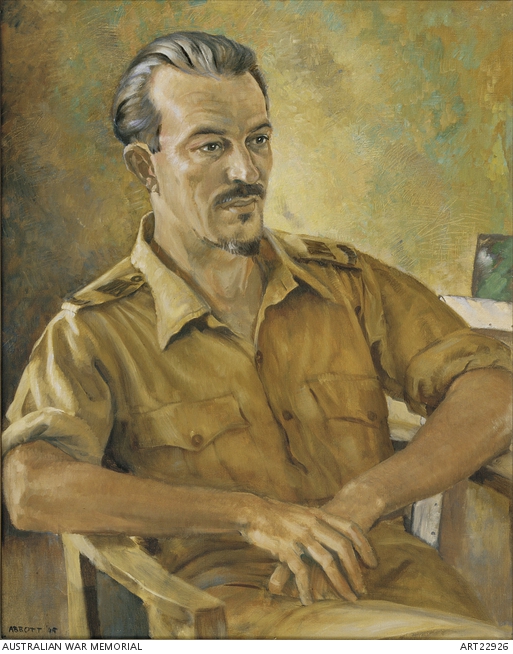 Portrait of official war artist Murray Griffin in uniform. Griffin was the first member of the Contemporary Art Society to be appointed an official war artist. In November 1941 he arrived in Singapore to take up his commission with the 8th Division AIF. In January 1941, Japanese forces invaded the Malay Peninsula and captured Singapore in February. Along with 15,000 other Australians, Griffin became a prisoner of war. In captivity for over three years, Griffin retained his status as an officer and although required to do his share of camp chores, was exempt from forced labour. This enabled him to have more time to continue his work as an artist, though he had to make do with improvised materials.
During the fighting Griffin had stored his art supplies in Singapore. They were found several months later by a prison working party and returned to him. When these supplies were exhausted, fellow prisoners scrounged or manufactured replacements. He completed over 230 works on the life of the prisoners and their struggle to survive. He also illustrated survivors accounts of the horrors of the Burma-Thailand railway. Some of his well known works include the drawings 'Two men carrying basket of Ceylon Spinach, Changi' (1944) and "Got a light, Dig?" (1944).