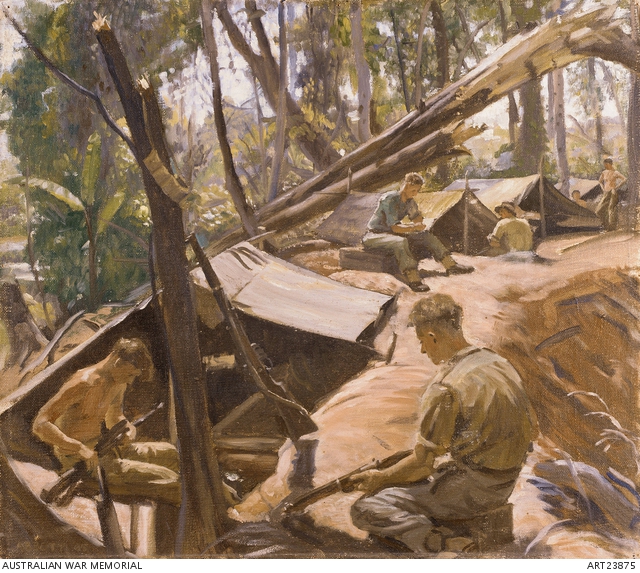 Showing Slater's Knoll a week after the Japanese attack on the morning of 5 April 1945. The front had now been pushed forward and life was quiet again on Slater's Knoll; the 25th Australian Infantry Battalion had just vacated the position and it was now occupied by troops of 'B' Company, 58/59 Australian Infantry Battalion. This work was painted with the simple object of showing life in a dug-in forward position, and gives an idea of many other sites where the infantry had been dug in for some time. The latrine with a 4-gallon oil drum serving as a seat, would be out in the open, away from the tents on the right, and food would be carried in dixies from the cook house, further back, and served to the men on the position. In the tents were two bunks made by using the canvas of the issued stretchers, supported by saplings. The legs of the stretchers were then stored in the Left Out of Battle (LOB) area, as they would be too bulky to carry.

Pictured, is a Bren gun pit in the immediate left foreground where a lad is shown cleaning his weapon. There is a steep bank on the left of the picture, making a natural defence. This is actually at the rear of the site. As the Japanese attempted to take the knoll by force of numbers they approached up the gently sloping side to the right, beyond the limit of the painting. The Bren gun in the pit in the foreground supplied most effective cross fire. On the right can be seen part of a large bomb crater, made during the Japanese occupancy, and the uprooted trees cutting diagonally across the picture were evidently thrown up when the crater was made.