HMAS Perth in the Battle of Sunda Strait 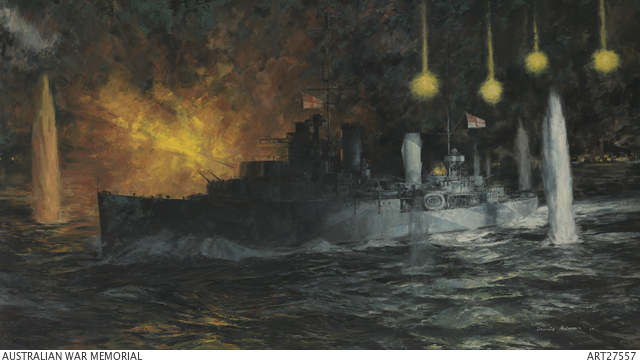 After service in the Atlantic and Indian Oceans and in the Mediterranean, the Australian light cruiser HMAS Perth transferred to the Pacific to reinforce the Allied naval forces opposing Japan. With British, Dutch and American ships she took part in the Battle of the Java Sea - costly action which preceded the Japanese invasion of Java on the night of 28 February to 1 March 1942. The Perth and the US cruiser, Houston, attempted to make passage southwards through the Sunda Strait, but encountered a large enemy fleet in Bantam Bay. Both cruisers were sunk by gunfire and torpedoes in the fierce fight which ensued, but not before inflicting considerable damage to the enemy. Perth lost 350 officers and men including her commander, Captain H.M.L Waller, DSO.