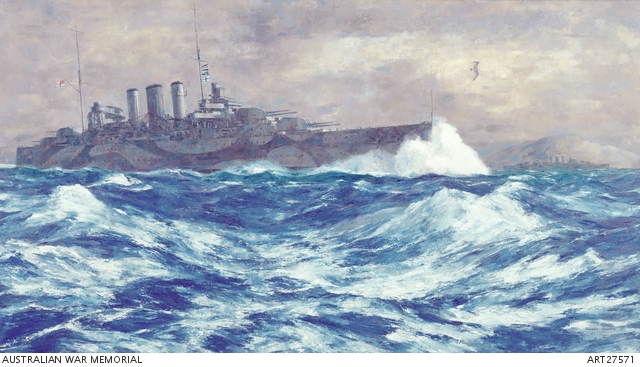 HMAS Australia (1928-1954), was based at Scapa Flow attached to the Royal Navy's Home Fleet. She joined H.M.S Norfolk in an operational task which took the ships well inside the Arctic Circle, to capture German trawlers reported to be working in waters off Bear Island, between the north coast of Norway and Spitsbergen. Although the icy and menacing waters of the Arctic Sea around Bear Island were thoroughly searched no trace was seen of the enemy trawlers. The cruisers then set course for base. On the way home they passed close to the coast of occupied Norway and the Australia's aircraft was catapulted off to make a reconnaissance and bomb attack on military installations at Tromso. Cloud intervened over the fiords, however, and the mission was aborted. From this fruitless but interesting assignment in the Arctic H.M.A.S Australia steamed almost immediately to join operations off West Africa - only fifteen degress north of the equator.