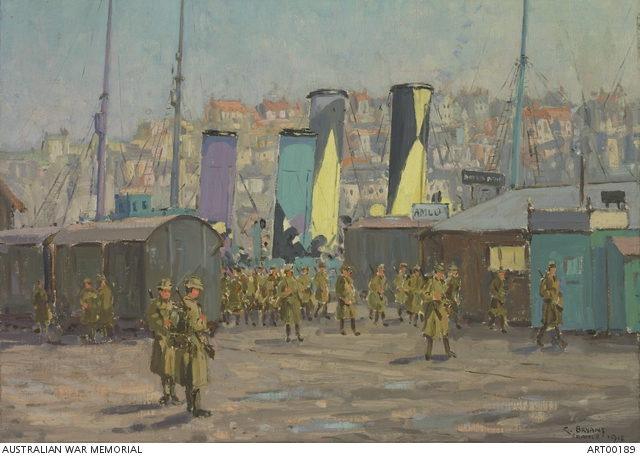 Painting of Australian troops disembarking from ships at the wharf in Boulogne, France, during the First World War.

The artist exhibited two related works, 'Leave Ships from Blighty, off Boulogne' and 'Boulogne in War Time', at the Atheaneum Gallery , Melbourne, in June 1923. Charles Bryant (1883-1937) had some early art lessons before beginning his career as a clerk in the Bank of NSW. In 1908 he travelled to London and studied marine painting at St. Ives in Cornwall. In December 1917 he was appointed as an Official War Artist, attached to the 2nd Division AIF working in France. His commission was terminated in December 1918 and he returned to Australia in 1921 where he undertook further work for Australian War Records. In 1923 he was commissioned by the War Memorial to paint a series of works in connection with the occupation of German New Guinea by Australian troops. From 1924 to 1930, Bryant ran a paint shop in Manly where he was a founder of the Manly Art Gallery in 1924. In 1925 he was commissioned to paint the United States fleet in Sydney Harbour for presentation to the President of the USA.