Waterfront Herbertshohe, where the troops landed from boats 11 September 1914 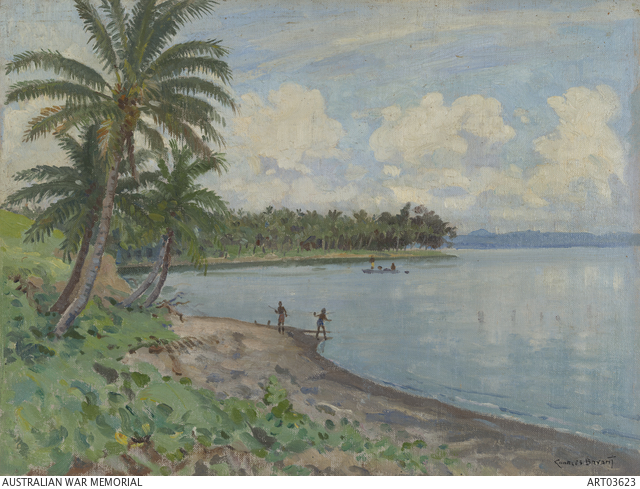 Depicts the waterfront at Herbertshohe, New Britain, with the beach, palm trees and a number of men spear fishing. Charles Bryant (1883-1937) began art lessons at the age of 9 and on leaving school worked as a clerk in the Bank of NSW. In 1908 he travelled to London and studied marine painting at St. Ives in Cornwall. In December 1917 Bryant was appointed an official war artist attached to the Second Division AIF, working in France. His work included paintings of the embarkation and disembarkation of troops at ports in France. His commission was terminated in December 1918 and he returned to Australia in 1921 where he undertook further work for the Australian War Records Service. In 1923 he was commissioned by the War Memorial to paint a series of works in connection with the occupation of German New Guinea by Australia troops. He worked in Rabaul from September - November 1923 and continued to work on this commission intermittently until 1926. This painting is one of a number of the commissioned works Bryant produced for Australian War Records between 1923 and 1926 of the Australian occupation of German New Guinea. He began sketching in Rabaul between September and November 1923, completing many works in Australia.