HMAS Sydney's fight with a Zeppelin in the North Sea 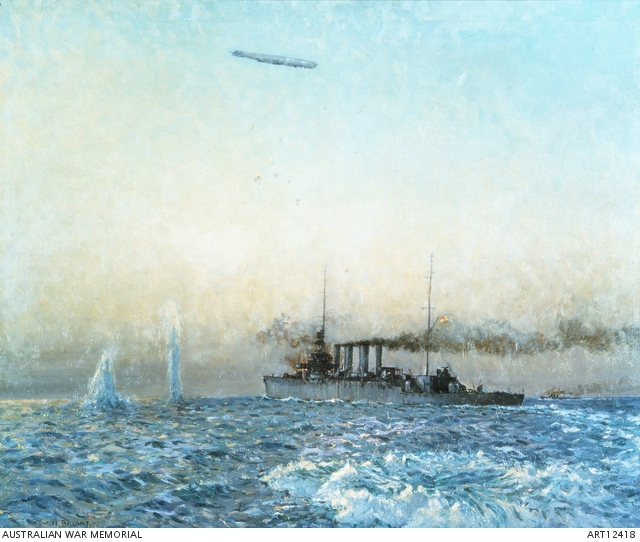 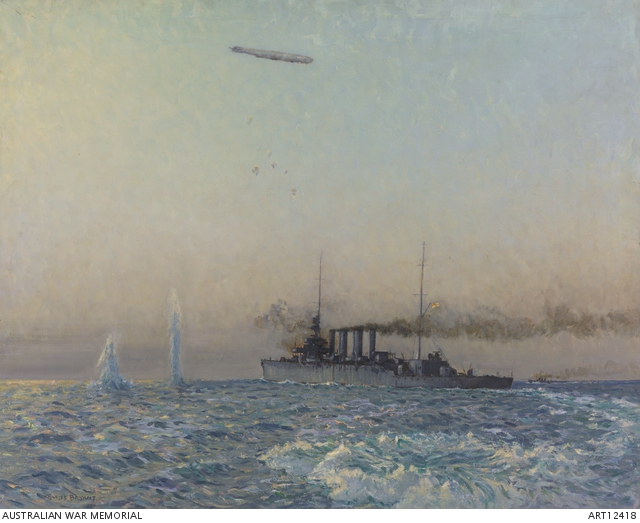 Featured in this work is an unusual action involving the Australian light cruiser 'Sydney', which took place on 4 May 1917. Under Captain John Dumaresq the cruiser was leading a British ship, 'Dublin', and four destroyers on a sweep of channels south east of Rosyth, Scotland, between the Forth and Humber estuaries, when the force came under attack from the German naval Zeppelin L43. The five-engined airship was first sighted shortly before 10.30am, approaching the east at about the same time as Dumaresq discovered that several submarines were in his vicinity. By charging in the dirigible's direction and opening fire with anti-aircraft guns at extreme range, the cruisers forced the airship to rise steeply and veer off. As soon as Dumaresq ordered his force to resume its original course, the L43 began stalking the ships. After failing to gain a bomb-dropping position on the 'Dublin', the Zeppelin targeted one of the destroyers and managed to land three bombs within ten metres of it. The airship captain then turned his attention to the 'Sydney' which began evasive action. The duel continued for two hours, drawing to an inconclusive end only after the Zeppelin ran out of bombs at approximately 2.30pm. By then the cruisers had also expended all ammunition for their high altitude guns. Both sides reportedly parted on good terms. 'Sydney' had become the first Royal Australian Navy vessel to be subjected to an air attack.