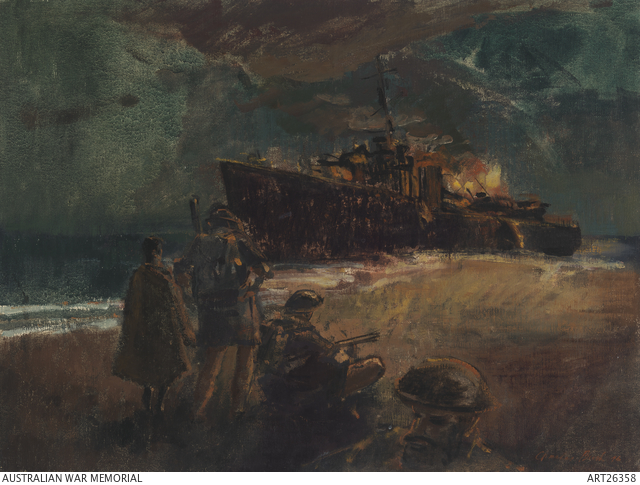 In February 1942 Japanese forces invaded Dutch and Portuguese Timor, overwhelming the defending forces except for the 2/2nd Australian Independent Company in Portuguese Timor which withdrew into the hills and began waging a guerilla war against the enemy. After contact with Australia was re-established maintenance of the guerillas was undertaken by the Navy and the Air Force. On 22 September the destroyer HMAS Voyager left Darwin carrying the 2/4th Australian Independent Company, which was to relieve the 2/2nd. The ship made passage safely to Betano Bay, on the south coast of Timor, where the change-over was to take place. Disembarkation was in progress when currents caught and swung the ship on its anchors, causing her to ground solidly at the stern. Efforts made to free her were unavailing, and next day Japanese bombers attacked the ship relentlessly. The Voyager crew exploded demolition charges on board and, for good measure, she was fired fore and aft early next morning. The Voyagers crew were later evacuated to Darwin by the corvette, HMAS Warrnambool.