All that was left of them 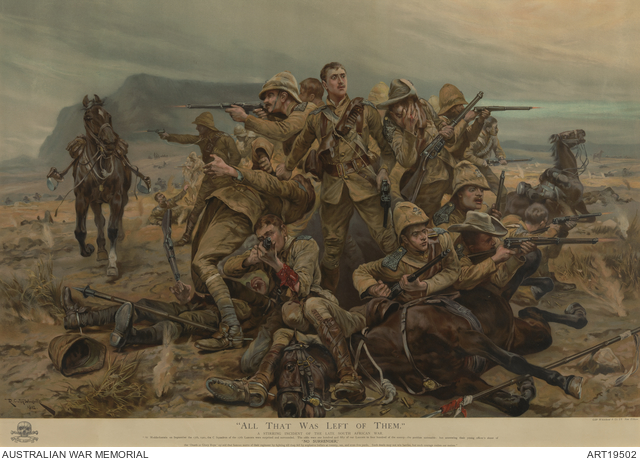 Depicts C Squadron of the British 17th (Duke of Cambridge’s Own) Lancers during the fighting at Modderfontien Farm on 17 September 1901, during the Boer War. The force comprising of 140 men were attacked by a much larger Boer force, resulting in a significant number of the men killed and wounded. The men depicted fighting amongst the wounded men and their horses are armed with Lee Enfield Cavalry Carbines and Pattern 1868 lances.
In the bottom left hand corner of the image the 17th Lancers unit badge is illustrated. A skull and crossed bones above a scroll inscribed ‘Or Glory’, pertains to the units moto ‘Death or Glory.’
Richard Caton-Woodville (1856-1927) was a painter and illustrator, chiefly of historical and military subjects. Born in London, son of an American painter of the same name who had settled in London in 1852. He studied in Düsseldorf, Germany and worked for most of his life for 'The Illustrated London News' and reported the Russo-Turkish War of 1878, the Egyptian campaign of 1882, the Boer War and the First World War. Exhibited at the Royal Academy from 1879, accompanied the Duke of Clarence on his Indian tour in 1889-90 and also executed commissions for Queen Victoria. He died in London in 1927.
This chromolithograph was published in 1902 by Gilbert Whitehead and Company Limited as a supplement to the 'Holly Leaves’ Christmas publication.