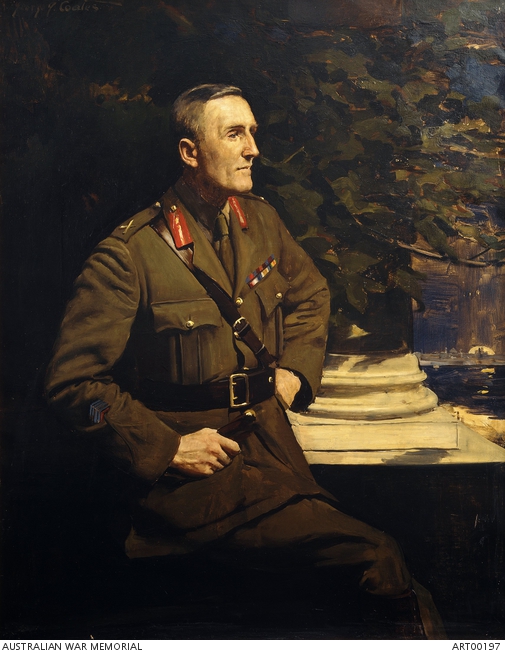 Depicts a portrait of Brigadier General Thomas Griffiths, CMG, DSO, a regular soldier and administrative specialist, Griffith was Secretary to the Australian Military Board at the outbreak of the war in 1914 and left Australia with the AIF as a staff officer with the 1st Division. On Gallipoli in 1915 and later in France he served in staff appointments in the administrative field, and was Military Secretary to the GOC, AIF, charged with the duty of interpreting the GOCs powers and responsibilities. At the end of 1916 he left for France to become Commandant of AIF Administrative Headquarters in London, an appointment he retained until 1919. He received the DSO in 1916, was appointed a CMG in 1917 and CBE in 1919.
George Coates (1869-1930) was a war artist during the First World War. Between 1895-96 Coates studied painting under L. Bernard Hall, acquiring both respect for the painter's craft and the approach of the Munich School. He won a travelling scholarship in 1896 and went to London next year before moving to Paris, where he worked at the Académie Julian and studied under Jean Paul Laurens. In Paris Coates renewed an acquaintance with a fellow art student, Dora Meeson (1869-1955) who later became his wife. Coates and Meeson established themselves in Chelsea, London where they became members of an extensive circle of Australian expatriate artists. Coates established himself as one of London's leading portrait painters, and his realism and representational style emphasized a harmonious range of low tones, with a detailed and painstaking approach.