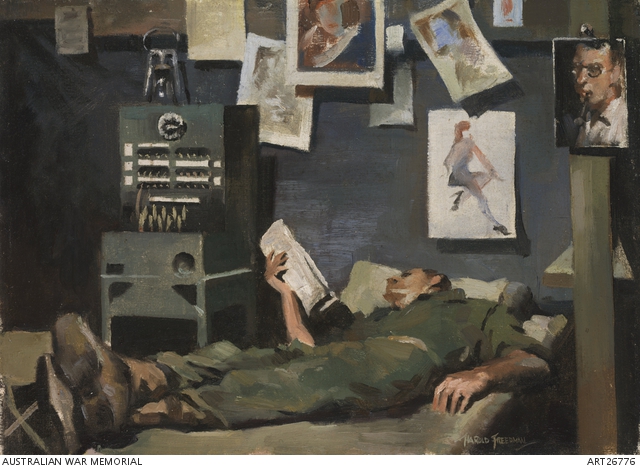 This painting depicts the mundane yet essential role of communications at 80 Wing Headquarters, Telephone Exchange at Moratai. Engaged in a task colloquially known as 'spinebashing', a young officer, lying on a makeshift camp bed, reads a newspaper. The telephone exchange unit stands to the left of him with the miscellaneous ephemera of service life, photographs, posters and pin ups, covering the wall behind his bed. The narrow picture space, emphasised by the proximity of the officer's boots to the viewer, is further heightened by the artists's use of dark green and brown tones. The carefully constructed scene, which includes Freedman's self portrait attached to the pole, conveys a mood of calmness and alertness. During the Second World War Freedman enlisted in the RAAF and was appointed as a war artist attached to the RAAF Historical War Records Section and he worked here from 1944 to 1945, in Borneo, Noemfoor and around Australia.