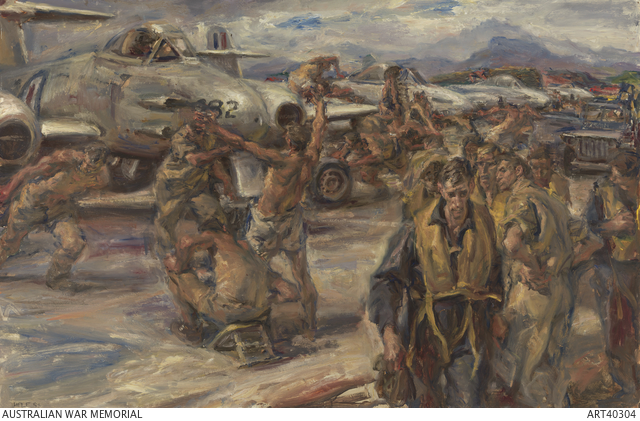 In the capacity of official war artist in Korea, Ivor Hele was 'requested to paint the men and machines of 77 Squadron, Royal Australian Air Force at Kimpo. These are Meteor jets of 77 Squadron after completing a sortie and returning to Kimpo, the main airstrip outside Seoul. An Australian pilot is in the centre foreground with a group of crewmen working behind him, the Meteor jets lined up in the background. Meteors were the first jets to fly operationally with the RAAF. 77 Squadron was based at Kimpo in early 1951 and flew from there until the end of the Korean War. The new silver Gloster Meteor jets were not easy to depict and at times Hele struggled to convincingly portray their form and surfaces.The figures in the work have a sense of disparate and unconnected activity. The crewmen are working together, but remain somehow apart. Hele was striving, but not quite succeeding, to build a formal set piece action painting, something he had so successfully created in the past. The difficulty he had in creating these works parallels the dogged efforts of the soldiers and airmen he depicts. Hele's Korean works have a nervous edgy quality and are powerful yet disturbing images of the Korean War.