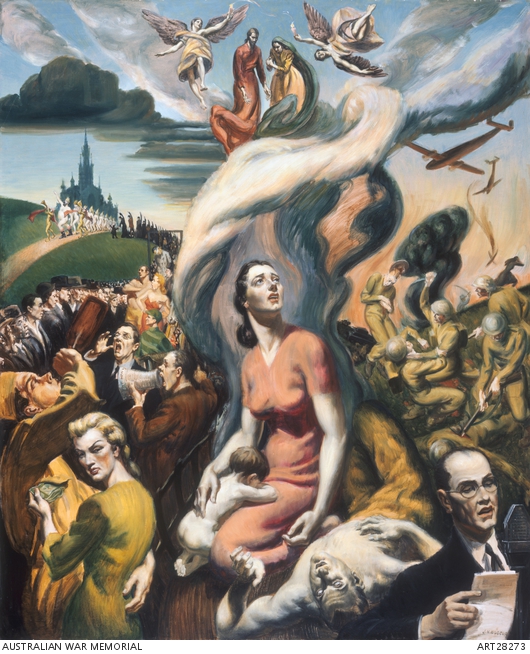 The design, influenced by El Greco, is based on the X structure with a column of smoke to help contain and separate the different parts, with the clouds, to separate the spiritual from the earthly aspects of life, at the same time to impart movement to the whole design. The central theme is that of the shattered family whose only hope springs from a belief in spiritual values, remote and dimly seen but offering an escape from the surrounding turmoil. In the upper left-hand corner the Emperor of the New Clothes fable leads his courtiers in a parade to display the beauty of their garments which they have been lead to believe by their tailors only people of taste and discernment can perceive. A child, unaware of his own ignorance, draws attention to the fact that they are not wearing any clothes at all. Lower down the crowds gather to be entertained and beguiled by the media with crime, sport, scandal and news of the day. While at the bottom left a whore plies her profession with skill and aid from alcohol. On the right hand side, soldiers indistinguishable from each other kill and are killed in a fury of combat while at the bottom right hand corner the urban radio announcer calmly broadcasts his message of horror.