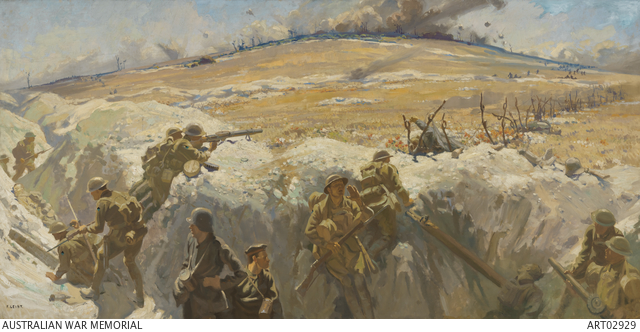 Depicts Australian soldiers (17th Battalion) and German soldiers in a captured German trench on the flank of Mont St. Quentin. The 17th Battalion colour patch, diamond shape and horizontally divided black over green, is clearly visible on a number of the Australian soldiers in the foreground. A barbed wire fence, surrounded by red poppies, runs off into the middle distance, and artillery barrage can be seen on the summit of Mont St Quentin in the background.

Fred Leist (1873-1945) worked as an illustrator for the 'Bulletin' and 'Sydney Mail' during the 1890s and established his reputation as a black & white artist. He was an official war artist attached to the 5th Division AIF from 3 January 1917 to 31 March 1920. He served in France from September to December 1917 and from June to August 1918. He had previously worked for the British War Office designing recruiting posters from 1915 to 1916. The National War Records Committee on 13 October 1919 recommended that Leist be commissioned to paint 'The Capture of Mount / St Quentin' and be paid 300 pounds for the commission. After his war service he painted two large murals for the Australian Pavilion at the British Empire Exhibition held at Wembley in 1924. As a result of these works Leist gained several commissions from the United States and toured the south-west before returning to Australia in 1926.