The taking of Lone Pine 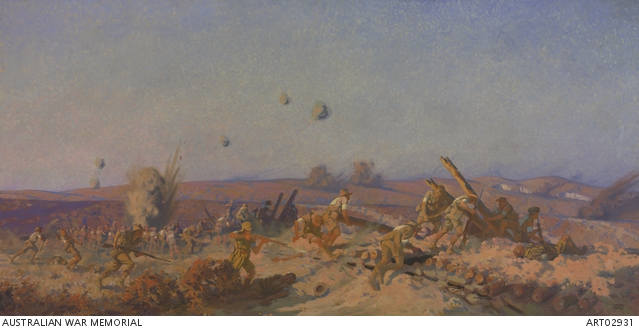 Depicts the battlefield at Gallipoli during the Battle for Lone Pine. At the landing in April 1915 a single pine tree was growing on the site and the Australians called it 'Lonesome Pine' from the title of a popular song of the day, 'The Trail of the Lonesome Pine'. The tree was destroyed in the early fighting but its seeds were planted in Australia. In early August 1915 Lone Pine was the site of some of the bloodiest fighting on the Peninsula during the famous bayonet attack on the Turkish trenches by the 1st Australian Infantry Brigade (seen here wearing white arm bands and white calico patches on their backs). On reaching the enemy's positions the Australians found the trenches covered by heavy logs; they broke into the trenches and, after fierce hand-to-hand fighting and resisting Turkish counter-attacks over several days, they captured them.