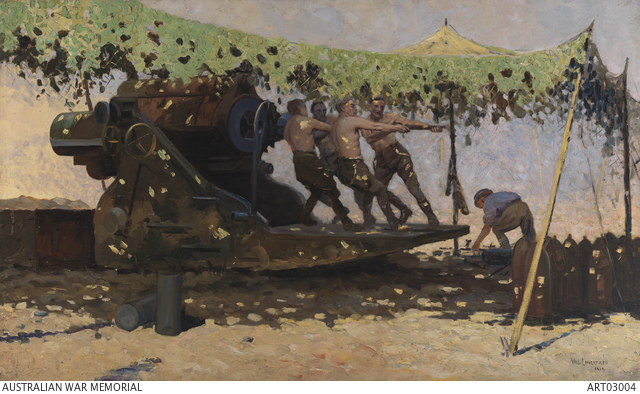 Although 'Australian 9.2 howitzer' was painted in 1919, immediately after the war, it clearly represents a scene from the last phase of the fighting. The centrepiece is a large howitzer, the heaviest gun used by the Australian siege batteries. It is appropriate that Longstaff recorded the artillery because massed artillery barrages, with infantry and tanks, were an essential element in finally breaking the stalemate on the Western Front. The howitzer was a hard taskmaster for the artillerymen. Longstaff's painting shows four gunners straining to ram home another shell. The men are stripped to the waist, reflecting the exertion of their task and the hot, dry weather that was so characteristic of that time. The gun and artillerymen have been portrayed hidden under camouflage netting. The shade emphasises the sinister bulk of the gun and contrasts sharply with the surrounding brilliant sunlight. For Longstaff this would have been a familiar scene, as he would have been trained in camouflage work and was officer in charge of camouflage for the 2nd Division, Australian Imperial Force. The camouflage was an essential precaution at this stage of the war, as each side tried to conceal the nature and extent of its artillery.