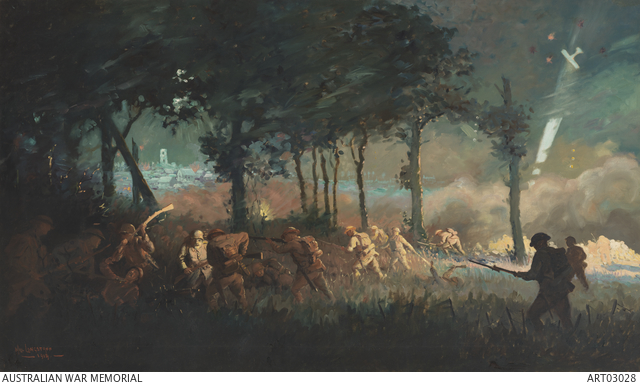 Depicts the action in which Cliff Sadlier and Charlie Stokes of the 51st Battalion were awarded the Victoria Cross and Distinguished Conduct Medal respectively. The battalion took part in the counter attack launched on 24 April 1918 which resulted in the recapture of Villers-Bretonneux from the Germans on Anzac Day 1918. The men, both from Perth, were on the left of their battalion when they came under German machine gun fire, which they were able to stop through organising their battalion’s bombing section. Although Sadlier was wounded, and the rest of the party became casualties, their action enabled the left flank to advance. Through the trees, on the far horizon, the remaining ruined tower of the church at Villers-Bretonneux can be observed.

Charles Bean assigned the depiction of this battle to Will Longstaff, despite Longstaff having been in London at the time of the event. Longstaff did however spend a considerable amount of time in Villers-Bretonneux, demonstrated by the many drawings he created of the town in his sketchbook.

Will Longstaff first saw active service from 1900 to 1901 when he enlisted with the South African Light Horse in the Boer War. From October 1915 he served in the Remount Department in the Middle East and France before being invalided to England in October 1917. In 1918, Longstaff was one of seven Australian Imperial Force artists selected to work with the Australian War Records Section. He was attached to the 2nd Division AIF, and went to France, where for a period of time in June he was billeted with fellow artist Arthur Streeton. After the war, Longstaff joined AIF artists at the St John's Wood studio, London, to create historical war paintings for the national collection. He was officially discharged in 1920.