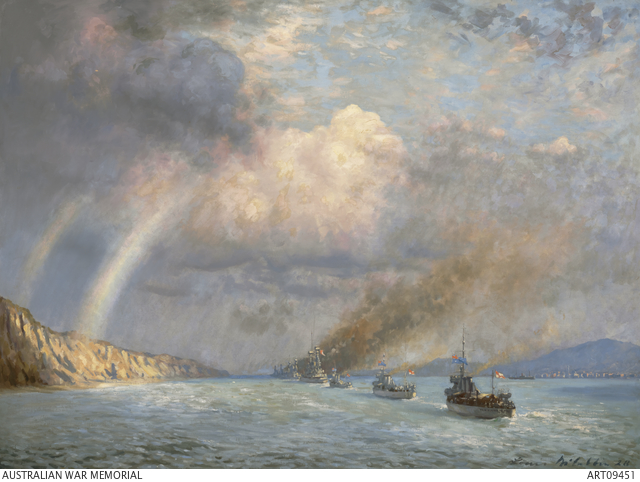 Depicts ships of the Royal Australian Navy, 5th Flotilla, HMAS Yarra , Torrens and Parramatta, accompanying an Allied fleet to Constantinople (Istanbul) after the capitulation of Turkey, sailing through the Dardanelles. The three ships are Royal Australian Navy destroyers,and as the ships were steaming through the Dardanelles, the commander of the Parramatta sought permission to fly an Australian blue ensign in tribute to the men of the AIF killed at Gallipoli in 1915. The answer was: 'The Commonwealth blue ensign may be flown at the port yard in honor of Australia's glorious dead'. This painting has been ascribed a number of titles and completion dates including 'Australian Destroyers off Gallipoli' 7 Apr 1927 and 'Australian T.B.D.'s paying homage to the gallant dead of the A.I.F. off Gallipoli' 27 March 1927.

Louis McCubbin enlisted on 31 May 1916 and served with the 14th Battalion, AIF. He served in France from 2 November 1917 with the 10th Field Ambulance and in 1918 undertook a camouflage course. On the 5 May 1918 he was appointed official war artist working as Officer in Charge of camouflage attached to 3rd Division AIF. His commission ended on 14 June 1920. From 1920-1930, McCubbin worked for the Australian War Memorial painting diorama backgrounds. During the Second World War he was involved in organizing camouflage in SA and NT.