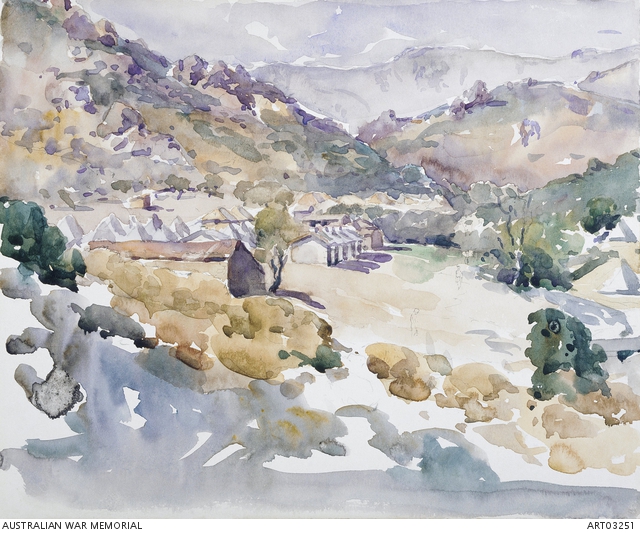 Depicts the stone cottages on Imbros that were used as the winter quarters of General Birdwood, with tents in the right and background. Horace Jones was born c.1868 at Malvern Wells, Worcestershire, England. He arrived in Auckland, New Zealand, with his family probably in 1885. After studying art under Anne Dobson, a painter and sculptor, he married her in 1891. They moved to Sydney, Australia, where Anne died in 1901. From 1892 to 1905 Horace Jones exhibited with the Art Society of New South Wales. At this time he changed his name to Horace Millichamp Moore-Jones and painted what may be his first war subject 'The departure of the Ninth Contingent from New Zealand for the South African War', which he presented to the Auckland Art Gallery in 1902. About 1908 he returned with his family to Auckland. There he taught privately and at the Ladies' College, Remuera, where his mother was principal, and exhibited with the Auckland Society of Arts. About 1912 he travelled to London, enrolled at the Slade School of Fine Art, and joined Pearson's Magazine as a staff artist. In 1914, at the age of about 46, Moore-Jones enlisted in the British Section of the New Zealand Expeditionary Force. To gain acceptance he shaved off his moustache, cropped his hair and lied about his age. Before joining the main body of the force in Egypt on Christmas Eve 1914 he trained on Salisbury Plain, and after being posted to the 1st Field Company of Engineers participated in the allied landing at Anzac Cove on the Gallipoli peninsula in April 1915. He was subsequently attached to Lieutenant General Sir William Birdwood's ANZAC Printing Section to make topographical pencil and watercolour sketches of the landscape and plans of allied and Turkish positions. His sketches of the harsh terrain, made under hazardous conditions, were an invaluable aid for planning operations and defence, and were used to illustrate official dispatches. He also made informal picturesque studies of the landscape around Imbros (Gökçeada). Known as 'Sapper Moore-Jones', he chose to remain in the ranks and offered comfort to the sick and wounded while working as a field artist. In November 1915 he received a wound in his right hand which put a temporary end to his work. His health deteriorated and he was invalided to Britain suffering from exhaustion. After recuperating at the 1st Southern General Hospital, Birmingham, he made further watercolours based on his Gallipoli studies. An exhibition of these was held at New Zealand House from 11 to 24 April 1916 and shown by command at Buckingham Palace. It received a good deal of public approval, and reproductions of his sketches were made in 1916. In 1916 Moore-Jones was classified unfit for battle duty and repatriated to New Zealand. He settled in Auckland where he undertook portrait commissions and private teaching. His Gallipoli watercolours were shown in Auckland and later toured New Zealand. Thousands attended the exhibitions and heard his talks about the Gallipoli campaign. The sketches provided images of the war through which those at home could feel closer to those involved. Many prints were made and sold to the public and Moore-Jones offered to paint similar scenes on commission. While in Dunedin with the exhibition he painted the first of his watercolours of 'The man with the donkey'. On 3 April 1922 the Hamilton Hotel where Moore-Jones was staying caught fire at four o'clock in the morning. Although he escaped without difficulty, he returned to the building to rescue others who were trapped there. Observers said that he displayed the 'greatest heroism', and that 'his gallantry was responsible for many being saved'. Later that day Horace Moore-Jones died from shock following extensive burns.