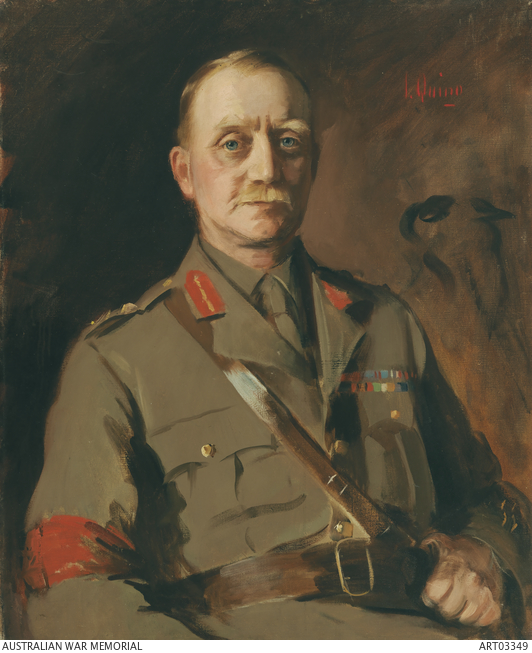 Official war artist James Quinn was instructed to paint the portrait of Major General Sir Harold Walker as part of an ongoing series of portraits that acknowledged senior military leaders in the Australian Imperial Forces.

Harold Bridgwood Walker was born the son of a country clergyman on 26 April 1862 at Fox Earth, Staffordshire, and educated at Shrewsbury School, one of England’s leading boys’ public schools. Walker went on to Jesus College, Cambridge, but left without completing his degree.

At the age of 22 he embarked on his army career. In the era of Queen Victoria, he joined the Duke of Cornwall’s Light Infantry, and went to war for the first time in 1884, with his first campaigns in Egypt and the Sudan. He spent the following decade serving on the North-West Frontier of India.

Service in the South African War further cemented Walker’s reputation as a fighting soldier. Arriving early, he transferred as a Special Service Officer and from November 1900 commanded the 4th Mounted Infantry Regiment. He saw extensive service, mostly in the Transvaal, was twice mentioned in despatches, was awarded the Distinguished Service Order and promoted. When the war was over, he was made assistant commandant of the army’s school of mounted infantry.

In 1904 Walker was transferred to the 2nd Battalion, the Border Regiment, as second-in-command. Four years later he was promoted to command the 1st Battalion, which was to go to India. In 1912 Walker was promoted and shifted to a desk on the headquarters staff in India. It was an uncomfortable fit. However, the outbreak of the Great War soon saw him back to holding a fighting command.
In late 1914 Lieutenant General Sir William Birdwood was appointed to command the Australian and New Zealand Army Corps (ANZAC) assembling in Egypt, and Walker was made his chief staff officer with the rank of brigadier general. Birdwood commanded the ANZAC at the Gallipoli landing. Walker was involved in the planning but, quickly found himself among the fighting from the first day.

Placed temporarily in charge of the New Zealand Infantry Brigade for a few days, Walker was next placed in command of the 1st Infantry Brigade, Australian Imperial Force. When General William Bridges was mortally wounded, Walker replaced him as commander of the 1st Division until General James Legge took charge. Legge’s appointment was not popular, and Walker took over for good. Historian Charles Bean sent a story to the Australian newspapers from Anzac, in which he wrote:

‘Walker [is] constantly visiting corners into which he would not allow anyone else to go. He knows every point of the defence line, as possibly no other man in the Division knows it, and knows men, and is known by them, in a way which is seldom possible for any high officer’.

On the Western Front, big battles were conducted by corps or armies, and divisional commanders had little scope. Still, Walker’s part at Pozières is noteworthy. Walker was at his peak commanding a division. He was not a great tactical innovator and mostly left administration to others, while demanding high standards from them. His great strengths lay in his understanding of the business of war, the capacity to read a battle, and his command of men. He was also served by two remarkable Australian staff officers, White and Blamey.

From June 1918 Australia’s Sir John Monash was appointed to command the Australian Corps (which had replaced ANZAC) while Birdwood went off, taking White with him, to lead the British 5th Army. The “Australianisation” of the corps continued, with other British officers being replaced. Against his own best interests, and despite his seniority, it was a concept that Walker supported. He handed the 1st Division to Major General Thomas Glasgow, a Queenslander, who took over on 28 June 1918. Walker commanded the British 48th Division in Italy, and when the war ended was in charge of all British forces in the country. He was knighted in 1918 (KCB) and 1919 (KCMG). After accepting a high post in India, he finally retired from the army as a lieutenant general in 1928; he died six years later.

Harold Walker’s close connection with Australia had ended quite abruptly. He never produced memoirs, left no papers and did not visit Australia. Within the history of the AIF, the battle-scarred general is remembered as “a cultured, brave and unselfish ‘English gentleman’.” When writing ‘Anzac to Amiens’ in 1946, Charles Bean needed to describe him in just a few carefully chosen words. He said that he was “a tiger in a fight”.