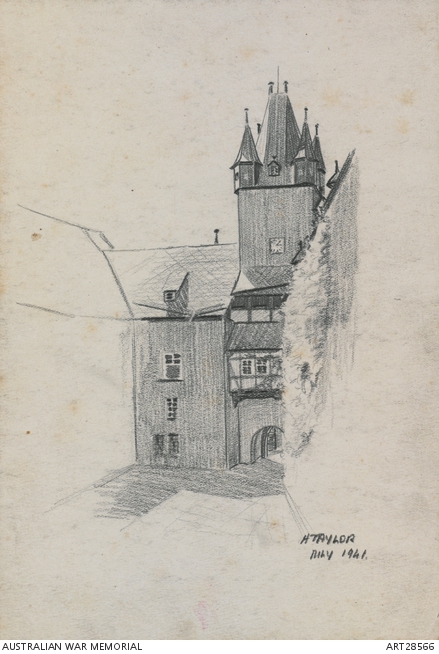 A competent technical drawing of the clock tower of Schloss (Castle) Spangenberg and one of the early works of art completed by Taylor while a Prisoner of War. The media was probably supplied by the Germans or Australian Red Cross, and it appears that the drawing is on a perforated page from a sketchbook. It is likely that Taylor completed this work while interned in 'Oflag IXA' in Spangenberg. The work reflects his technical drawing training, and does not yet have the relaxed, more minimal style of the later studies he completed while a POW. It is likely that he developed this later style under the guidance of fellow internees who were artists.
Taylor is recognised as one of Australia's most significant modernist artists - working across various media and a highly competent draftsman, painter and sculptor. Howard Taylor was interned as a prisoner of war from 19 May 1940 until the end of the war in prisoner of war camps: Dulag Luft Oberwesel, Oflag IXA Sprangenberg, Oflag VIB Warburg and Stalag Luft III Sagan (Germany) and Stalag XXA Thorn and Oflag XXIB Schubin (Poland). During this period he took up drawing to help pass the time. The Red Cross provided basic art supplies and among those interned there were several men with art school training who were able to offer advice- Taylor met Guy Grey-Smith, another Western Australian artist, while in a POW camp. Taylor used his time well, acknowledging the scope of skills required to successfully tackle pictorial representation. WWII Prison Camp, Stalag Luft III, Sagen, Germany is a study of the camp environment at Stalag Luft III in watercolour, and it explores light to reveal form. He studied part-time on a RAAF rehabilitation grant at the Birmingham College of Art in England from 1946 - 1948. He returned to Perth, Western Australia in the following year, and held his first solo exhibition. He taught painting at Perth Technical College and then drawing and sculpture at the Western Australian Institute of Technology.