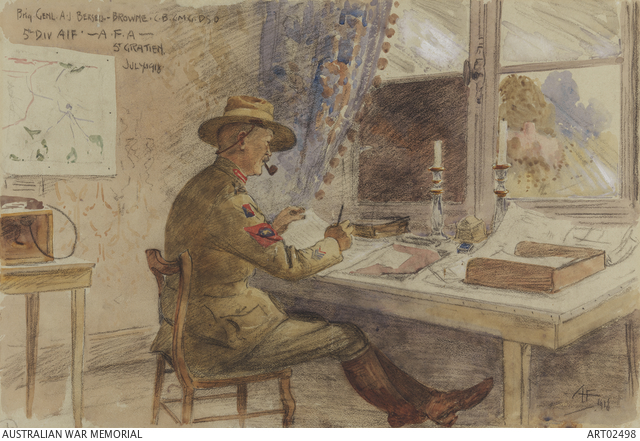 Portrait sketch of Brigadier General Alfred Joseph Bessell-Browne, commanding officer of the 5th Division Australian Field Artillery, seated at a desk at the 5th Division AIF headquarters in St Gratien. Bessell-Browne volunteered for South Africa in 1899, enlisting in the 1st Western Australian Contingent as a private. He was then commissioned as a lieutenant in 1900. He returned to Australia in March 1901 but immediately joined the 5th Western Australian Contingent as a lieutenant, serving as adjutant and then second in command. He was promoted to captain in June 1901 and in July was awarded the Distinguished Service Order. He was promoted to captain in 1908 and then promoted to major in August 1911, and took command of his battery, now known as the 37th Field Battery. In August 1914, Bessell-Browne was appointed to the AIF with the rank of major and given command of the 8th Field Artillery Battery. On 2 August 1915, he took over as commander of the 3rd Field Artillery Brigade. He was switched to the 2nd Field Artillery Brigade on 27 August, back to the 3rd again on 8 September and then back to the 2nd on 13 September. For his services at Gallipoli, Bessell-Browne was made a Companion of St Michael and St George. He was promoted to temporary lieutenant colonel on 15 October 1915, a promotion made permanent in January 1916. Bessell-Browne's brigade participated in the attack on the Pozieres, which saw first use of a creeping barrage by Australian troops. In September 1916 he was attached to the 1st Division Artillery and commanded it from September 1916 to January 1917 in the absence of Brigadier General Hobbs. In January 1917, Bessell-Browne became commander of the 5th Division Artillery. Two days later he was promoted to colonel and temporary brigadier general. He commanded the 5th Division Artillery at Bullecourt and the Third Battle of Ypres, where he employed artillery to cover the flank. In the mobile warfare that followed the German offensive of 1918, Bessell-Browne showed himself adaptable and flexible and pioneered new tactics to provide close support for the infantry. From 16 to 24 October 1918, Bessell-Browne commanded the US 30th Division's artillery, for which he was awarded the American Distinguished Service Medal. For his services on the Western Front, Bessell-Browne was made a Companion of the Bath. During World War II he commanded the Volunteer Defence Corps in Western Australia. He retired as a brigadier general in 1942. Bessell-Browne died on 3 August 1947 and was cremated with full military honours.

Albert Henry Fullwood was born in Birmingham, England in March 1863. In 1883 he sailed to Australia and began work as a lithographic draughtsman, working on the staff of illustrated journals such as 'Australian Town and Country Journal' and the 'Bulletin'. In 1900 he went to the United States, then to London, as an expatriate artist where he worked as a freelance illustrator, receiving commissions from newspapers and journals, including the London 'Graphic' and designing postcards. From April 1915 until November 1917 Fullwood served with the Royal Army Medical Corps as an orderly at the 3rd London General Hospital at Wandsworth in the company of fellow artists Coates, Roberts and Streeton. He was subsequently appointed an official war artist, attached to the 5th Division AIF, working in France between May and August 1918 and from December 1918 to January 1919. His major contribution as a war artist was to record aspects of the war which others may not have noticed or taken for granted. His works have a narrative element and captured Australian soldiers in 'straightforwardly picturesque views of their environment'. Fullwood returned to Australia in 1920 after his commission had been terminated and became a foundation member of the Australian Painter Etcher's Society in 1920 and the Australian Watercolour Institute in 1924. He died from pneumonia in October 1930.