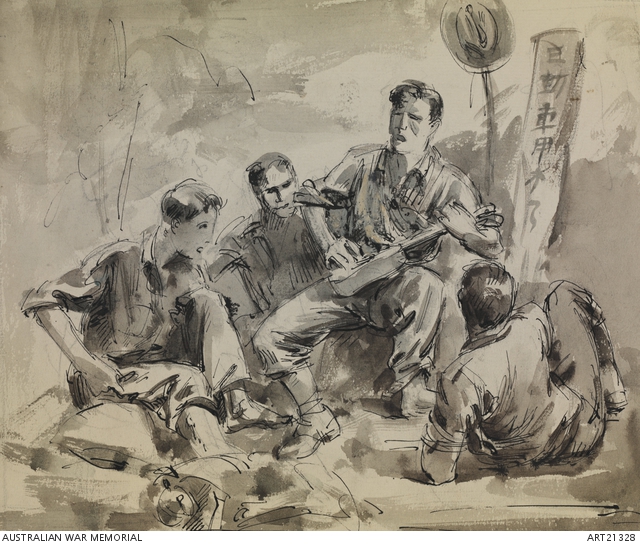 One soldier is playing a guitar, while three others sit around him singing along. This is as sketch of members of the 2/10th Australian Infantry Battalion after a long climb up the mountains to Casey's Knoll, Ramu Valley, Finnisterres Range, New Guinea. Dargie noted,
"During the long climb up the mountain to Casey's Knoll (see No 286), I had noticed that one of the chaps was carefully carrying a small ukulele. He didn't seem to care how much mud covered his rifle, or his pack or himself, but he was most solicitous about his instrument. He was a big fellow, and the tender care with which he carried this tiny ukulele, seemed fantastically at variance with his whole appearance. However, none of his cobbers saw anything at all strange in this, apparently.
Next day, I realised why. After most of the mud had been removed from their clothes, and they were reasonably dry, I heard them begin a sing-song. A small group of men was gathered around the owner of the ukulele, all singing the mournful sort of sentimental songs for which soldiers seem to have a partiality, with the greatest of gusto. Then some quite unprintable parodies on came. Soon nearly everyone from the platoon was joining in".