Australian troops disembarking at Alexandria after the evacuation of Greece 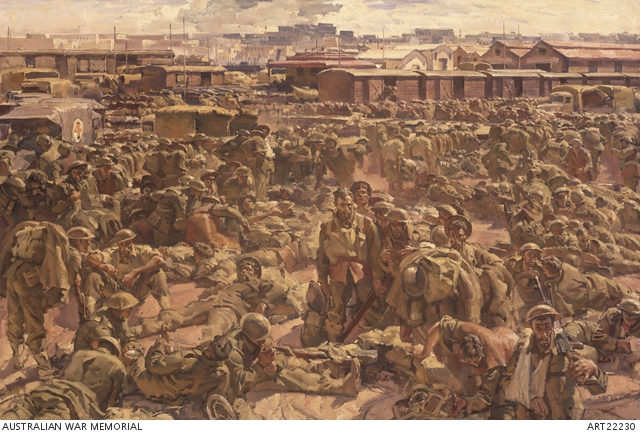 Exhausted Australian soldiers disembarking from trains at Alexandria after the evacuation of Greece. Hele was in Alexandria to observe the arrival of the battle-weary Australians. He made numerous studies of the troops that he used as the basis for this large composition. The tired men wait with resignation to be transported to their next location. The feeling of overwhelming exhaustion is reflected in their heavy bodies and fixed gazes. Although massed together with other soldiers, each individual figure appears isolated, as if self-absorbed in the tragedy of the circumstances. Hele described the scene as follows: 'in the background ... is Alexandria and the docks, with sheds etc. The immediate foreground is taken up with the men resting, standing about. On the left are the ambulances for the wounded. In the centre, or rather just behind the group sitting down, you can just see the walking wounded. Behind them again are the files of men circling around the trestle tables getting their mugs of tea, sandwiches etc and in the near background the trucks waiting to take them to Amarya [sic] and Palestine. For a picture like this, you must know, one had to take a certain licence, to include all the incidental details and I'm afraid that is where I've taken such a long time, in the initial composing of the picture.' Ivor Hele to John Treloar, AWM file 206/002/006 Part II, 2 December 1942)