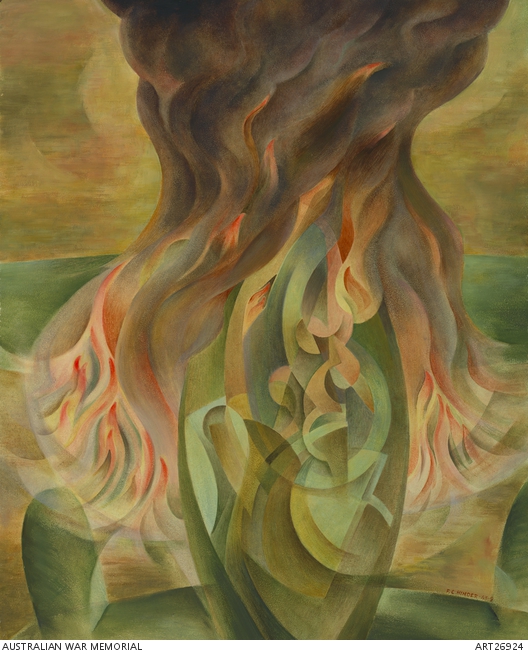 In 1941 Frank Hinder's Lockheed bomber, in which he was undertaking an aerial reconnaissance mission, crashed in Rabaul. The work 'Bomber crash' is a synthesis of the exotic environment in Rabaul, the dreadful experience of the plane crash and Frank Hinder's strong philosophical beliefs. Hinders concern is for the composition of the inside and outside of the plane and for the plane's occupants. The plane is presented tail first, double rudder at the bottom and the fuselage, now elongated, rising vertically from the centre foreground. The wings spread edge to edge horizontally across the middle, dark smoke and flames billow off centre to the top. Through a process of resolution his subject develops from the specific incident of the disaster to the universal idea of the regenerative power of fire. 'Bomber crash' is made up of semi abstracted forms, rampant flames and billowing smoke are the prime elements. From among this heat and fury arises the head of a phoenix, a mythical bird and the symbol of the regeneration of life through fire. Its wings surround and protect the men within.