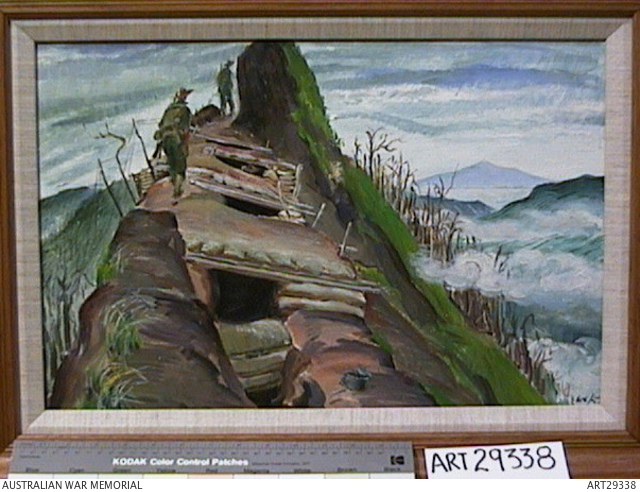 On his tour of New Guinea in 1944 Wep visited 'Guy's Post' , an advanced dressing station on Shaggy Ridge in the Finisterre Ranges. Visiting the site of 3 months of fighting between the Japanese and Australians troops whilst the former tried to hang onto the strategic peak he wrote home 'Well, I have at least seen Shaggy Ridge and what a hell of a place it is. Heaven only knows how the boys took it over... On either side of a track only wide enough for one the earth falls near sheer. The top of it is riddled with fox holes. After struggling to the top of this bloody mountain I came across some of the lads coming down - we sat and had a cigarette'. The pimple had been captured by the Australians in January 1944. One of several paintings he made at this time 'Ascending the Pimple' shows two Australian soldiers walking passed captured Japanese foxholes on the pimple. This painting was reproduced in a feature on Artist Wep in New Guinea in 'the Australian Women's Weekly', 10 June 1944. William Edwin Pidgeon (1909-1981) was a painter, cartoonist, illustrator and newspaper critic. Working with Consolidated Press, he was appointed a war correspondant and artist in 1943. He became renowned for his cartoons signed with his initials, 'WEP'. During the Second World War many of his illustrations were published in the 'Australian Women's Weekly' and on the cover of the magazine. His humourous works conveyed the lives, personalities and conditions under which Australian troops served in Darwin, New Guinea and Borneo. During the Second World War he also contributed cartoons to the Army periodical, SALT. After the war he continued to provide illustrations for books during the 1950s, but mainly concentrated on portrait painting. He won the Archibald Prize in 1958, 1961 and again in 1968 for a portrait of fellow artist Lloyd Rees. From 1974-79 he served as the art critic for the 'Sunday Telegraph' newspaper.