The arrival of the first Australian wounded from Gallipoli at the Third London General Hospital, Wandsworth 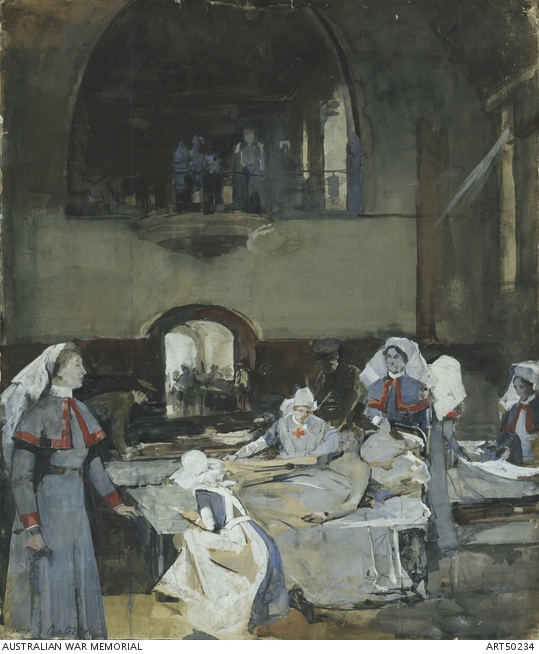 This work is a study for a work of the same title. It depicts the arrival of the first Australian soldiers wounded from Gallipoli at the Third London General Hospital, Wandsworth, with a number of nurses from Royal Army Medical Corps, Australian Army Nursing Service or Queen Alexandra's Imperial Army Nursing Service depicted. A patient lies in bed with other wounded men arriving at the hospital ward and nursing staff attending to them. From April 1915 to April 1919 George Coates served with the Royal Army Medical Corps at 3rd London General Hospital at Wandsworth (along with fellow artists A H Fullwood, Tom Roberts and Arthur Streeton).
George Coates (1869-1930) studied painting under L. Bernard Hall between 1895-96 acquiring both respect for the painter's craft and the approach of the Munich School. He won a travelling scholarship in 1896 and went to London next year before moving to Paris, where he worked at the Académie Julian and studied under Jean Paul Laurens. In Paris Coates renewed an acquaintance with a fellow art student, Dora Meeson (1869-1955) who later became his wife. Coates and Meeson established themselves in Chelsea, London where they became members of an extensive circle of Australian expatriate artists. Coates established himself as one of London's leading portrait painters, where he lived until returning to Australia in 1921, and his realism and representational style emphasized a harmonious range of low tones, with a detailed and painstaking approach.