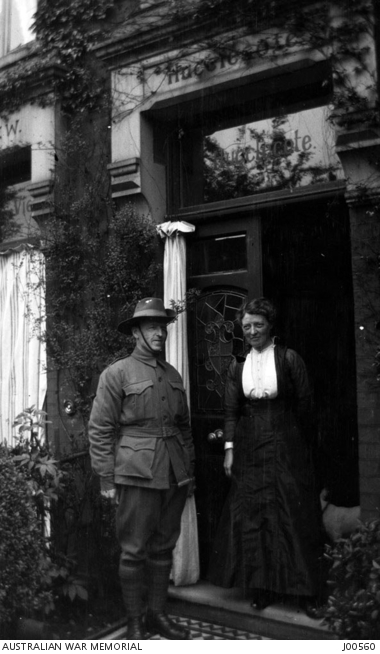 Mrs A T Sharp farewells a welcome guest, 1120 Private (Pte) Horace Edgar Brownhill, from 65 Cranhurst Road, Cricklewood, London. Pte Brownhill, 31st Battalion, of Geelong, Vic, enlisted on 12 July 1915 and returned to Australia on 21 July 1917. From the collection of Mr Alfred Thomas Sharp. Mr Sharp was the Commonwealth Immigration Officer of Victoria and was based in the London Office during the First World War. He and his wife hosted and visited many soldiers, particularly those from Victoria, who were recuperating in London. He also photographed many Australian graves in English cemeteries. His photograph collection relating to this period in London was bequeathed to the Memorial in 1922 after his death. During his time in London he was a member of the British Volunteer Regiment, serving with the Willesden Battalion, Middlesex Volunteer Regiment.