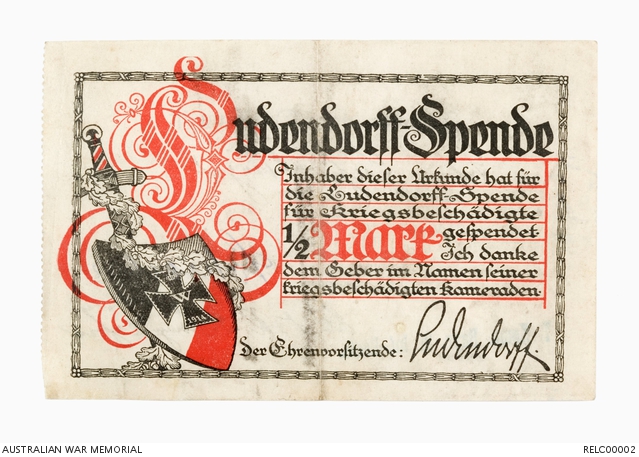 Currency collected by Lieutenant Sydney Fairbairn Rowell, 3 Light Horse. Rowell was born on 15 December 1894 in Adelaide, South Australia. He spent 3 years at the Royal Military College Duntroon, and rose to the rank of Lieutenant with the Australian Permanent Forces. Rowell enlisted in the AIF on 15 September 1914, in South Australia. He then embarked from Newcastle for Alexandria on 21 December 1914. Rowell arrived at Gallipoli on 5 May 1915, and was taken on strength by 3 Light Horse Regiment as Lieutenant on 12 May at Monash Valley. He was evacuated sick to Alexandria on 26 July 1915 and then rejoined his regiment a month later on 25 August. Rowell was made Temporary Captain on 9 September at Destroyer Hill, and then made temporary Adjutant on 12 September 1915. He relinquished rank on 10 November when he was evacuated, suffering from enteric. He was transferred to a hospital ship from 1st Australian Casualty Clearing Station, on 12 November. Rowell was admitted to 21st General Hospital at Alexandria on 15 November. The medical board at Ras-el-rin declared Rowell incapacitated for military service for three months and he was transferred to 2nd Auxiliary Hospital, Heliopolis, Cairo, for further treatment on 31 December 1915. He embarked from Suez on HT Karoola, suffering debility from enteric, on 20 January 1916. He disembarked at Adelaide on 21 February 1916, and was admitted to 7th Australian General Hospital at Keswick with paratyphoid fever. Following recovery, Rowell held various posts with the Permanent Forces including one as Instructional Staff with Duntroon Officers Training School from 1 July 1916. His appointment with the AIF was terminated on 30 April 1917 (although one record mentions 15 January 1918). He then received a commission with the Permanent Forces on 16 November 1917. Rowell later served during the Second World War and rose to the rank of Lieutenant General. For his war services he was awarded a Greek Cross First Class, and was appointed a Companion of the Order of the Bath, as well as a Commander of the Order of the British Empire (CBE). He was later appointed a Knight Commander of the Order of the British Empire (KBE).