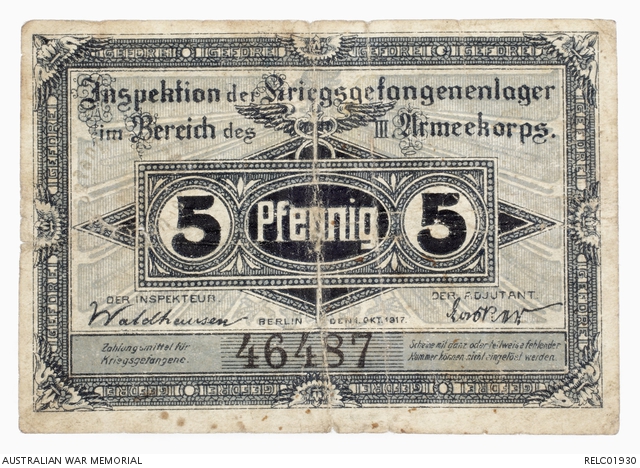 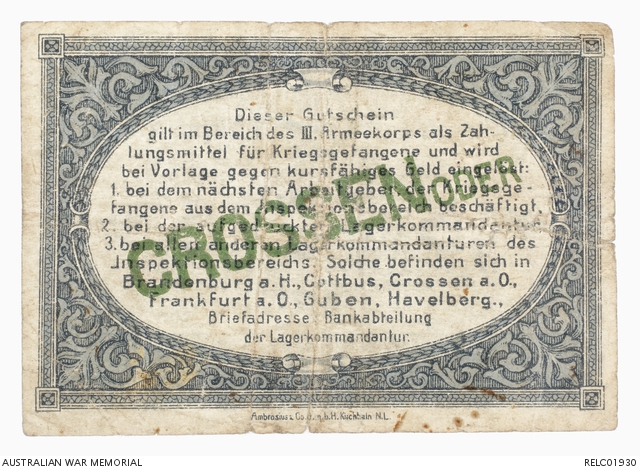 Grey German 5 pfennig note, serial no. 46487. The note has been circulated and has both central and horizontal fold marks. There is some staining along the edges of the note.

German prisoner of war camp currency associated with the service of 343 Private George Jenning Bean. Bean was born in Yorkshire, England on 27 February 1894. He was working as a gas fitter in western Australia when he enlisted in the AIF on 10 March 1916. He embarked for overseas service with the 4th Machine Gun Company aboard HMAT Miltiades on 7 August, arriving in Plymouth, England on 25 September. He joined the Australian Details Depot, Parkhouse the following day and remained there until 14 November, when he was transferred to the Australian Machine Gun Training Depot, Grantham.

On 1 March 1917, Bean embarked overseas to France, arriving at the Machine Gun Base, Amiens. He joined 4 Machine Gun Company in the field on 17 March but was admitted to 4 Australian Field Ambulance less than two weeks later suffering from septic feet. He rejoined his unit on 3 April.

Bean was reported Missing in Action on 11 April and was confirmed as a Prisoner of War (POW) by the Red Cross on 8 May. He had been captured at Riencourt after being wounded in the right leg by an artillery shell. He was transferred to the POW Camp at Hameln where he remained in the camp's hospital before being relocated to Munster II, Rennbahn at Cologne on 3 June. Bean remained in the hospital at this camp until 27 August when he was discharged to the barracks.

Bean remained at this camp until the end of the war and was repatriated back to England in January 1919. He was granted one month's leave from 17 January but was admitted to 1 Australian Dermatological Hospital, Bulford on 3 February. Bean remained there until 31 May when he was discharged to a Training Depot at Parkhouse to begin his convalescence. Bean married 24 year old Edie Jennings from York on 2 August and was granted indefinite leave from 20 August. Bean and his new wife embarked for Australia aboard HMAT Shropshire on 2 December, disembarking in Fremantle on 13 January 1920. He was formally discharged from the AIF on 7 March.