'Some of the stretchers, hats, boots, equipment found in the area.' 'Scenes at the POW Camp, ... 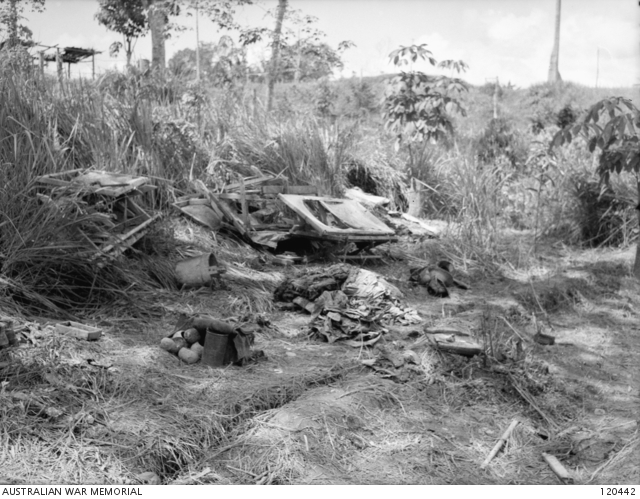 'Some of the stretchers, hats, boots, equipment found in the area.' 'Scenes at the POW Camp, Sandakan. POW Contact and Enquiry officers found the remains of an RAP in No. 1 Compound, believed to have been the last inhabited area in the camp after the two death marches to Ranau. Approximately 288 men were estimated to have been left in the Sandakan camp, none of whom survived. At the RAP, overgrown and partly demolished, Japanese parties were made to clear the area and POW Contact and Enquiry officers found hundreds of decayed pay books (British and Australian), a few identity discs, personal belongings, eating utensils, surgical instruments and books etc. It is estimated that approximately 1500 Aust and 1000 British PWs were held in the Sandakan area. Counted graves in two cemeteries in the camp and the civil cemetery were approximately 1250. The remainder were marched to Ranau in two groups and of the 2500 men, only 4 have survived as far as is known.' (Original official Military History Section captions, October 1945)