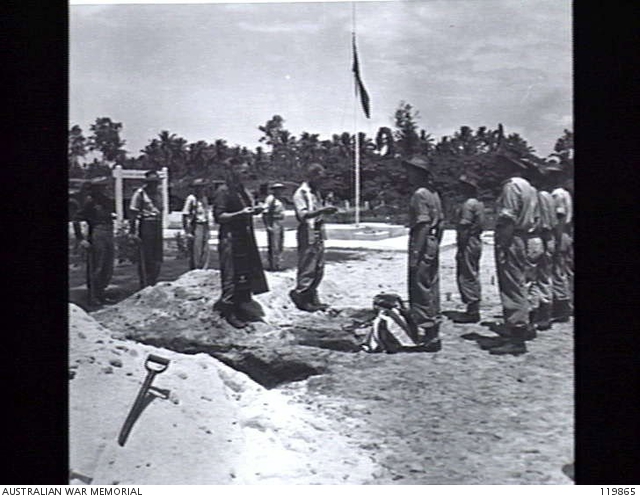 Flight Lieutenant (Flt Lt) B T McLaughlin (right), a Catholic RAAF Chaplain, and Flt Lt T W Scott (left), an Anglican RAAF Chaplain, (both in the centre of the photograph) conduct burial rites for two Australian Spitfire pilots. The flag draped caskets are in between the Chaplains and 443666 Flight Sergeant Robert J (Bob) Davies (left), a pilot of 79 Squadron, and 408021 Squadron Leader (Sqn Ldr) Ken E James, Commanding Officer, 79 Squadron. Sqn Ldr James carried the casket containing the remains of 405875 Flt Lt B. B. (Barney) Newman, 79 Squadron, of Ayr, Qld, in the funeral procession. Flt Lt Newman was killed in action during a strike against a radio station in the Wasile Bay are of Halmahera on 2 August 1945, he was 79 Squadron's last casualty of the war. Flt Sgt Davis carried the casket containing the remains of 432589 Flt Lt E McL (Mac) Stevenson, 452 Squadron, of Dubbo, NSW, in the funeral procession. Flt Lt Stevenson died in captivity on Halmahera after being tortured by the Japanese. He was captured when he was forced to ditch his Spitfire on a reef close to shore during a strike against Japanese installation on Ternate Island on 13 January 1945.