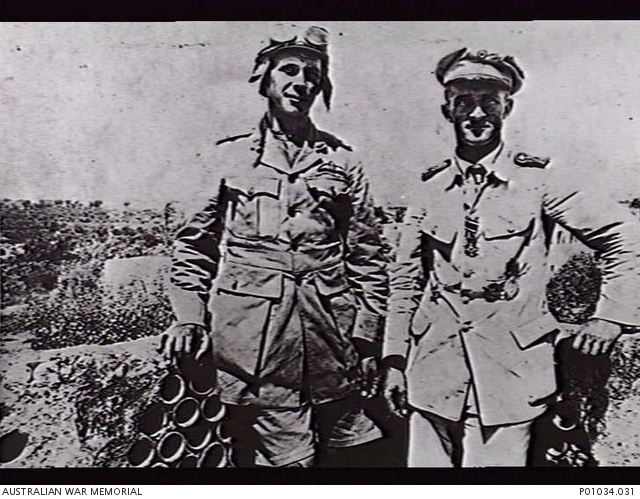 Outdoor portrait of Lieutenant (Lt) Claude Henry Vautin, No 1 Squadron, Australian Flying Corps (AFC), from Yuin, Western Australia on the left, and German aviator Oberleutnant Gerhardt Felmy on the right. Taken after Lt Vautin was forced down and taken Prisoner of War (POW) by the Germans, this photograph was dropped to the No 1 Squadron AFC airfield as proof that he was unharmed. An inscription on the verso of the photograph reads 'For my adversary - friends' specially for Murray Jones the upper-sport'. Vautin was a 24 year old softgoodsman when he enlisted on 6 February 1914 and embarked for overseas as a Signaller with the 10th Light Horse Regiment on 8 February 1915 aboard HMAT Mashobra. After serving at Gallipoli, he transferred to the AFC and was promoted to 2nd Lieutenant. He was captured at Beit Hanun, on the north east edge of the Gaza Strip, on 8 July 1917 and held as a POW in Turkey. Promoted to Lieutenant while a POW, Lt Vautin was repatriated to Cairo on 28 November 1918, a month later arrived in England and returned to Australia on 9 August 1920.