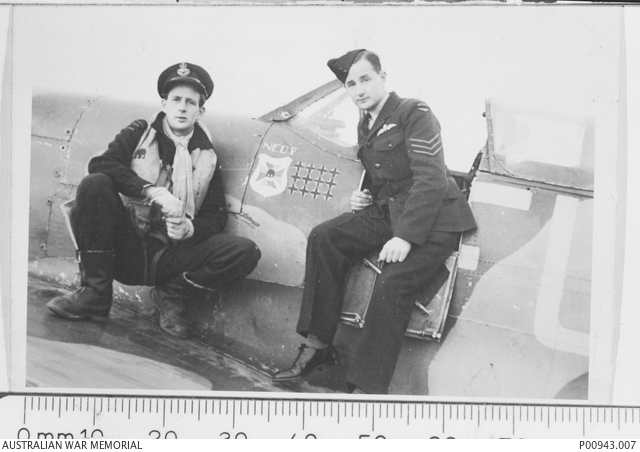 Brothers and members of 453 Squadron RAAF, 402823 Flight Lieutenant John William (Jack) "Slim" Yarra and 413707 Sergeant Robert Ernest (Bob) Yarra standing by the cockpit of Jack Yarra's Spitfire (MkVb EN824 FU-U). The aircraft is decorated with the twelve victory markings of Jack's score over Malta in 1942, together with the name "NED V". Yarra's girlfriend in Australia was nicknamed "Ned" and all his Spitfires were named for her. Jack Yarra was presumed killed at sea of the coast of Holland whilst on operations on 10 December 1942. Pilot Officer Bob Yarra was also killed whilst on operations on 14 April 1944 when his aircraft was shot down whilst attacking the flying bomb base near Abbeville, France.